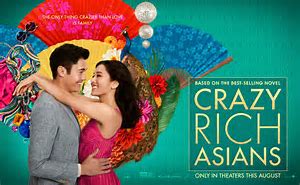 In my review of Kevin Kwan’s debut novel posted this week I said I thought it was ;

“an obvious choice for a film adaptation if Kwan’s balance between the slight plot, winning characterisation with great cameo parts and sheer opulence is maintained.”

Yesterday I took my chance to find out.  I rarely go to the cinema, probably once a year is a reasonable estimate, despite me having the two-for-one-deal for Tuesdays and Wednesdays from those pesky meerkats.  We have two cinemas on the Isle Of Wight, one the multi-plex Cineworld in Newport where I can use my two-for-one vouchers and The Commodore in Ryde which is continuing to battle alongside the big chains with its staff of what seemed like yesterday one person and cheap entry prices.  I paid £4.50 a ticket for the afternoon showing of “Crazy Rich Asians”, which makes it comparable with the two-for-one at the other cinema which was showing the same film but at a less convenient time.

The Commodore, Ryde -a cinema from another era! (Free bingo available)

There were just four of us in the auditorium to witness Kwan’s novel come alive on the screen, which might have been the smallest audience I have been in ever.  (The other couple did not even sit next to another but had a couple of seats between them which meant when they talked they had to do so across a bigger space, reminding me of one of the main reasons I don’t go to the cinema that often- the other main reason being the film trailers for forthcoming productions which end up showing so much of the film that when you watch it on DVD some six months later you end up believing that you’ve seen it before). 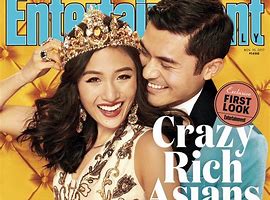 I did enjoy the film but the richness that I wrote about in Kwan’s cataloguing of the wealth is largely lost in making a fairly standard rom-com.  What I really liked about the book was that it dealt with a level of richness that was beyond the norm, so much so that it became unobtrusive, the Youngs were so wealthy that normally wealthy people did not know who they were.  When Rachel Chu visited her college friend’s opulent mansion in the book her family did not know of the Youngs nor of the grandmother’s vast estate that was situated in their neighbourhood.  In the film they knew all about the Youngs.  I was looking forward to seeing this extra level of wealth portrayed but obviously it couldn’t be conveyed successfully, so we got a super-wealthy family rather than a super-super wealthy and throughout I felt that the richness was toned down. 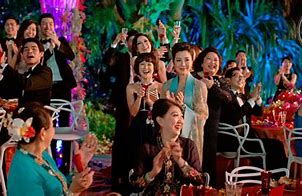 The book offered a wealth that we had never seen before in its description of the stag and bachelorette parties and the wedding that provides the main focus.  In the film these came across as less splendid, even a touch tacky.  The only thing I’d never seen before was the bride and attendants wading through a water-filled aisle.  Who wants that?!

Other than that niggle (quite sizeable as it was my fascination about this that made me want to go and see the film) it more or less had everything I was looking for.  There was a playing down of some of the characters – the subplot of Astrid and her husband’s philandering was much pared down and you did not get that same great sense of family and the inter-relations between the characters.  One character who had their part beefed up was Rachel’s friend Peik Lin played by American rapper Awkwafina.  She, together with her trashily rich dysfunctional family stole the show as far as I was concerned.  They lit up every scene they were in.  Constance Wu was spot-on as Rachel Chu.  She brought a maturity to the part (Wu is 36) that lifted it above many rom-com heroines.  I had never seen her before but Time magazine have her listed in their current 100 Most influential people in the world list, so a great choice to play Rachel.  British-Malaysian actor Henry Golding was also spot on to play Nick Young and his dazzling handsomeness shone through even in a cinema of four people.  Although how Rachel did not know he was from at least a well-off family with such a posh British accent was a little mystifying.

Kwan’s vision of the film has hopefully been rendered successfully with its all-Asian cast.  He reputedly optioned the film rights for $1 with the proviso that he remained in creative control after a suggestion to turn Rachel into a white American rather than Chinese-born American.  The whole thing is light and frothy, with a plot as slight as the novel but like the book it managed to win me over.  In the book v film argument I would say that this time it is the book that has the edge.