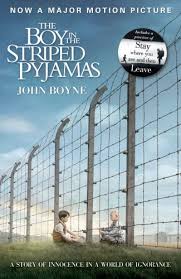 Irish author John Boyne has been one of the best finds for me in recent years.  My introduction to his work is my 2017 Reviewsrevues Book of the Year “The Heart’s Invisible Furies” and this year both “The Boy At The Top Of The Mountain” and his latest “A Ladder To The Sky” have been five star reads.

This is the book which made his name and although I have had it on my shelves for some years had never got round to reading it, despite my partner telling me it was one of the best books he has ever read.  I have seen the 2008 film adaptation and it’s taken me quite a while to get over it!

This may very well be one of the saddest books ever.   I knew what was going to happen because of the film and yet I consciously chose to read the ending in the public place of on the bus, thinking I would be less likely to break down in tears but it was a close run thing!

Boyne adopts an impassive narrative style making his writing reminiscent of a fairy tale or something within the oral tradition with its matter of fact sentences and fair amount of repetition for emphasis (for both the listener and the main character).  This is a book which would read aloud extremely well.  (Philip Ridley also did this very successfully with his much lighter tale “Krindlekrax”- a huge favourite of mine).  This oral feel is powerful and draws the reader in but also provides some emotional distance from the action which may initially protect from some of the horror but it also carefully and cleverly informs the plot making it all very believable.  The narrator sees everything from nine year old Bruno’s point of view but allows us to read between the lines with ever-mounting trepidation.

Like Pierrot in “The Boy At The Top Of The Mountain” Bruno is forced to relocate to a home very different from what he has been used to.  For Bruno this means with his family but away from his beloved grandparents left behind in Berlin.  In this new place which he pieces together is called “Out-With” there is no one to play with and instead of the view of Berlin from his bedroom window he sees groups of men and boys in pyjamas behind a wire fence.  His decision to go exploring to combat his loneliness cannot end well.

Also like Pierrot in the later novel at times Bruno’s interpretation of events feels insufferable but perhaps more comprehensible because of the lack of communication with his family, which allows such a distorted picture of his environment to be developed.  His view of the world is formed solely through his ignorance, there is not much that he gets right and that is a powerful thing to take from this novel.

Despite John Boyne’s development as a writer in the 9 years between this and the unofficial companion piece of “The Boy At The Top Of The Mountain” this eclipses it in terms of power and importance.  It is a book which works well in the Children’s, YA and Adult sections of the bookshop.  Frankly, everyone should read it.  The film version, although good lacks the power of Boyne’s words and style.

The Boy In The Striped Pyjamas was first published in 2006.  I read the 2008 Definitions paperback version.