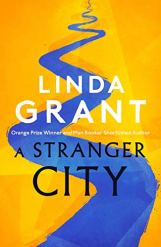 I read and enjoyed Linda Grant’s last novel “The Dark Circle” back in 2o16.  It was set largely in a TB sanatorium in a post-war Britain very much on the cusp of a modern age as the richly drawn characters awaited developments which would cure them and allow them back into the society their illness had removed them from.

The author’s latest places us into contemporary London where change is also anticipated and it is not good news as the city awaits the effects of Brexit.  It is a disorientating time in the city for the characters and becomes increasingly so as deportation trains begin to rattle through the night, “illegals” are held in prison ships and one sequence set in a dis-located part of London feels like Alice down the rabbit hole.

This shifting uncertain London shimmers in the background of a plot with a mystery story at its heart.  A suicide off London Bridge by an unidentified woman occurs on the same evening a documentary maker witnesses conflict between a man and an Irish woman on a train.  This woman, a nurse, also disappears but the power of social media ensures she is identified and cannot stay missing for too long.  The contrast between the two in the same location leads the film-maker to produce a television programme in an attempt to uncover the dead woman’s identity.  The people caught up in this story are the main protagonists of the novel.

As in the last publication characterisation is here a strong point, although the shifts of focus means that the reader is kept on their toes.  Nothing feels totally secure in Grant’s London as the novel shifts, undulates and unsettles throughout.  The real and the fictional blur from a character caught up in a terrorist incident on a London bridge to a nation where the tiniest error on paperwork can lead to expulsion from a country keen to rid itself of those it feels no longer belongs.  Concealing oneself in an attempt to fit in and disguise are themes developed within the novel.

It is very well written and feels more complex than “The Dark Circle” but is every bit as readable.  There is a freshness in the language which makes it feel it is produced  by a writer with a definite finger on the pulse.  It is another solidly impressive, intelligent work from this author whose reputation continues to grow.

A Stranger City is published by Virago in hardback on  2nd May 2019 .  Many thanks to the publishers and Netgalley for the advance review copy.