With the run down of A-Z artists complete on my 100 Essential CD lists there are still 14 spaces.  These are for the various artists compilations I play the most.  With these it is important to know what tracks can be found on the CD so here you will find them listed with their highest chart position (UK/US) if released as a single and links if I have more information on the artist elsewhere on the blog.  I’ll pick out a handful of tracks to give a flavour of what makes these CDs essential.

Sat at 99 is a double CD released in 1991 on the Dino Label with forty tracks largely by American artists.  These are the big names that dominated the charts in the late 50’s and early 60’s before the British Invasion and the Beatles ended most of their careers.  There’s a few that don’t quite fit into the category.  Title-wise its also a tad misleading as its broader than it suggests with my favourite tracks being those who fit more into the doo-wop and girl group categories.  There are some rock n roll classics in there as well.  There are many compilations which focus on this era including the very successful “Dreamboats And Petticoats” series but for me this mini-series which was preceded by Rock N Roll Love Songs has just about everything to give me a blast of nostalgia some dating  from before I was born and where the world seemed a much simpler place.

1.Unchained Melody – Righteous Brothers (1965) (UK #1- 1990, US#4) – The CD kicks off with one of the most successful chart songs of all time.  Back in 1965 the “Brothers” Bill Medley and Bobby Hatfield got to a middling #14 in the UK as the follow-up to their anthemic “You’ve Lost That Loving Feeling.”.  The song had previously been a number 2 1955 hit for Al Hibbler (US#3) and had reached the UK Top spot the same year for future mum’s favourite DJ Jimmy Young.  So a familiar song choice which might have explained why it under-achieved first time round.  The quality of the vocal performance here lingered and when Al and Jimmy’s version had been long forgotten the Righteous Brothers were deemed the perfect addition to the 1990 movie “Ghost” which explains its resurgence and the number 1 UK placing 25 years after its release.  The song had originally started off in a long-forgotten movie “Unchained” (hence the title which is not referenced in the lyrics) but after its Swayze/Moore association it has eased itself into the canon of popular music standards and has since topped the UK charts two more times  for musical thespians Robson and Jerome and Pop Idol runner-up Gareth Gates.  The Righteous Brothers have the definitive version.  It’s one of their best tracks (but not their best as the bombastic “Lovin’ Feeling” and “Ebb Tide” both do more for me.)

6. One Fine Day – The Chiffons (1963) (UK#29, US#5)- These girls were good.  Three hit singles in the UK and each one of them was a first-class representation of the girl group sound and yet they are largely forgotten today.  Here on this Gerry Goffin/Carole King composition they are probably at their very best.  There’s also great piano work from Carole King herself in evidence here.   The Chiffons were four girls from The Bronx, Judy Craig, Sylvia Peterson, Patricia Bennett and Barbara Lee and became one of the biggest acts on the Laurie label.  During their hit period the girls were plagued with the financial problems which beset many of the artists of the era.  Probably best known now as being the subject of a court case when George Harrison was found guilty of plagiarizing their US chart-topper “He’s So Fine” for “My Sweet Lord” in a bizarre sound-alike scenario (to me there are so many songs that sound far more identical than these two did to one another that got away with it). 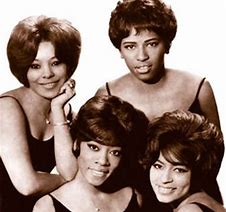 7. Three Steps To Heaven – Eddie Cochran  (1960) (UK#1) If taken literally this is rather a morbid choice for a UK posthumous single released less than a month after his death aged 21 killed in a car crash in a taxi coming back from a show at The Hippodrome Theatre in Bristol.  The heaven Cochran aspires to here in his self-composed song is getting a girl to love him rather than the pearly gates itself.  For someone who grew up with the number 2 1975 version from Showaddywaddy it is surprising to hear just how good the vocal performance on the Cochran original is.  Who knows what he would have gone on to achieve?  In the UK this was his fifth UK Top 30 hit.  His last singles chart appearance was in 1988 with a re-issue of another of his biggest hits “C’mon Everybody”.

11. Blue Moon – The Marcels (1961) (UK#1, US#1) – Certainly not unique in being a young doo-wop group adopting a song from a previous generation, in fact there are a few more examples of this on these CDs.  This Pittsburgh group certainly hit the big time with a version of a Rogers and Hart standard which dated from 1934, but it is impossible to hear subsequent versions without being aware of the Marcels (a group named after the hairstyle The Marcel Wave) and the thrilling doo-wop vocal arrangement from the very first notes of the bass voice Fred Johnson.  There’s a great lead vocal courtesy of Cornelius Harp which helped it top charts on both sides of the Atlantic for Colpix Records.  That familiar introduction was largely lifted from the group’s cover of “Zoom” by The Cadillacs.  In the spring of 1961 it really looked like The Marcels had arrived.  They continued to mine the hits of the past and scored one more US Top 10 hit with another song from the 1930’s “Heartaches”. In the UK only their version of Gershwin’s “Summertime” made any impression but they continued with “That Old Black Magic”, “Over The Rainbow” “My Melancholy Baby” until their original takes began to seem hackneyed and which overshadowed songs especially written for the group.  By the time the Beatles came along the Doo-wop craze had passed by.

13. Smoke Gets In Your Eyes – The Platters (1958) (UK#1,US#1) – Another mining of the Great American Songbook The Platters turned Jerome Kern’s 1933 song into an absolute tour-de-force.  This was largely because of lead vocalist Tony William’s outstanding tenor.  A group unusual in its time as it featured both male vocalists and a female Zola Taylor, who was married to lead “Teenager” Frankie Lymon which resulted in court action concerning his estate following his early death.  The Platters were there at the start of the rock n roll boom as they appeared with Bill Haley in the game-changing movie “Rock Around The Clock.”  This track was their only UK and last of their four US number 1’s and perhaps only overshadowed by their “The Great Pretender”. 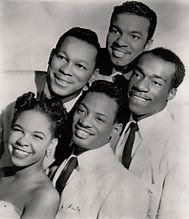 7. My Boyfriend’s Back – The Angels (1963) (US#1) – This girl-group classic topped the American charts but only attracted lowly sales in the UK.  The song speaks to the teenager in all of us and seems almost as relevant today in the world of internet trolls.  Somebody’s been scorned and bad-mouthing and when the boyfriend returns there is going to be trouble as he aims to save his girl’s reputation.  It’s fascinating in that it’s only half the story- we are never sure if the girlfriend is completely blameless (I’ve always suspected not).  There’s great handclaps a good lead vocal from Peggy Santiglia  and a hey-la hey-la refrain which always makes this a great listen.  The Angels never bothered the UK charts but this trio from Orange, New Jersey scored four Top 40 hits in total in their homeland and disbanded in 1967.

10.When A Man Loves A Woman – Percy Sledge (1966) (UK#2 (1987) US#1) Later than most of the tracks on this collection it fits in because it was another track (like the Righteous Brothers and Ben E King) which became revitalised in the mid 80’s UK nostalgia boom.  This had done better the first time round than the other tracks as in the year of its release it topped the US charts and got to number 4 in the UK.  It was a television ad for Levi’s jeans which reignited Percy’s career over 20 years after its release.  He reached the Top 40 four more times in his homeland and once in the UK.  He continued to record and perform live and died in 2015.

13. Remember (Walkin’ In The Sand) – The Shangri-Las (1964) (UK#14, US#5) – Both of the Shangri-La’s UK hits are featured on “More Rock N’ Roll Love Songs” and this one is absolutely bonkers.  The emotions are cranked up to breaking point,   the anguish about the death of “The Leader Of The Pack” seems quite tame in comparison to this overblown track which never seems sure which song it wants to settle into.  The Shangri-Las sound had a street toughness which has made their reputation resonate over the decades.  Two sets of sisters The Weiss’ and identical twins The Gansers from Queens New York knew how to do melodrama.  It doesn’t end there.  If you like these two tracks “Past Present And Future” “I Can Never Go Home Anymore” and “Give Him A Great Big Kiss” are certainly on a par with what we have on show here.

14. Twenty-Four Hours From Tulsa -Gene Pitney (1963) (UK#5,US#17) I grew up with this record.  It was one of a handful of singles we had at home until I started to use up all my pocket-money on seven inch vinyl in the mid 70s and may have even been my introduction to the work of Burt Bacharach and Hal David.  I love the story behind this song of the man who can “never go home again” due to a dalliance en-route.  Gene Pitney is never better than he is on this, even a version by the legendary Dusty Springfield which made it onto her essential “Silver Collection” pales by comparison.

18. Johnny Remember Me – John Leyton (1961) (UK#1)- John Leyton was a young British heartthrob actor who someone had the good idea (and it would happen again and again over the decades) to make him a recording star.  A TV acting part as a pop singer helped as it meant that the song could be performed on the show. Mad genius producer Joe Meek was at the helm and it was written by Geoff Goddard, a regular Meek collaborator and this chilling track which combined a galloping rhythm with a haunting disembodied female voice topped the UK charts even though it was banned by the BBC at the time.  Four more Top 30 hits followed and he can be seen cropping up in films in the period.  He kept up with the music and was continuing to perform as he approached his eighties. In one of the more bizarre song combinations of all time Bronski Beat and Marc Almond teamed it with Donna Summer’s “I Feel Love” and “Love To Love You Baby” and got to number 3 in 1985.

20. I Never Loved A Man (The Way I Love You) – Aretha Franklin (1967) (US#9) – Far be it for me to question the great Aretha Franklin’s presence on any compilation but this does seem a little out of place here.  1967 seems a long way from 1957 and the tracks by The Everly Brothers and Buddy Holly.  This blistering soul performance makes it feel very much of the next generation from the one represented here on the other 39 songs.

So forty tracks eleven of which topped the charts in either the UK or the US and even though if not always to my taste there really isn’t a filler track here.  This makes it an essential CD release which I play regularly when I want to sing along to tracks from a more innocent time.

More Rock N Roll Love Songs is currently available from Amazon in the UK for £5.49 new and from £0.67 used.