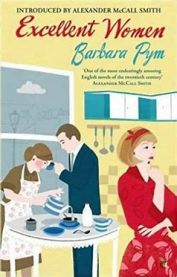 Barbara Pym was one of the British writers featured in Christopher Fowler’s “The Book Of Forgotten Authors”. I would dispute that she is forgotten. Admittedly, there was a time in the 60s and 70s when she faded from view but she has been reinstated in latter years (she died in 1980) and her gentle, observational novels are held in high esteem and read and re-read by devoted fans. The publishing house Virago have made sure today’s readership would not have to struggle to find her work.

I’d never read her before and had sort of put her in my mind as a missing link between Jane Austen and Victoria Wood. It’s not quite as spot on as that but it’s not too wide of the mark, with the small-scale world she creates pushing her closer towards a more modern-day Austen.

She depicts a fairly drab London “very much the “wrong” side of Victoria Station” in the post-war years which still has a village mentality but with its occupants faded into accepting their shabby environment. Everyone feels slightly down on their luck. It’s a world of stewed tea, washing hung up indoors to dry, shared bathrooms combined with the less urban aspect of jumble sales, knowing everyone’s business and with the vicar as the central figure of the community.

Mildred Lathbury is one of Reverend Julian Malory’s “excellent women”, someone who everyone “respects and esteems” but who is not destined for much excitement, passion or unpredictability. She is deemed such by everyone including her more dynamic new neighbour Rockingham Napier with his military background which seems largely to have been chatting up WRENS in Italy and his wife’s friend and fellow anthropologist Everard Bone (I’m not sure if Pym is being racy with a double entendre here). Mildred seems interested in all of these men but cannot move beyond casual acquaintance or friendship.

That’s largely the plot, but let’s agree it’s unlikely that many readers would read Barbara Pym for her plotlines. It is the close observations which enrich her writing. It’s an understated world which focuses in on small absurdities. Alexander McCall Smith in his introduction states that this is not laugh out loud comic writing but is likely to result in many wry smiles. Like Victoria Wood, who I had imagined Pym to be closer to be than she actually is, the humour is in the ordinariness of everyday life. Being caught up in an emotional scene whilst holding a teapot or having two ping pong bats in one’s grasp or with a baguette and a biography of Cardinal Newman poking out of a shopping bag is as riotous as it gets for these characters.

In a world where so much is brash Barbara Pym is a perfect antidote which should ensure a continued growth in reputation and I did enjoy my first experience of her work. I do think that as a reader I respond better to bigger issues and greater depth than evidenced here. This was her second novel and is usually up there amongst readers’ favourites. She spent almost a couple of decades not being able to find her place in the publishing world but she returned with the Booker shortlisted “Quartet In Autumn” in 1977, since then she has become an inspiration for many other (especially) British writers. I think I might have been expecting a little more as a result of this, the lightness of touch was a little surprising to me. I could almost say she was frothy but it would be a pretty down-at-heel frothiness, whipped tinned evaporated milk rather than whipped double cream would be more fitting for the world Barbara Pym’s characters inhabit.

Excellent Women was published in 1952. I read a 2013 Virago paperback edition.