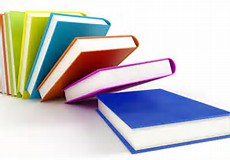 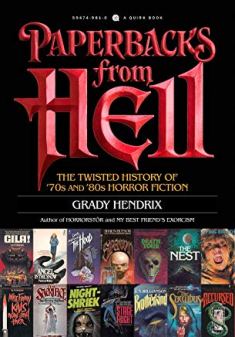 Subtitled “The Twisted History Of 70’s and 80’s Horror Fiction” I could almost feel this book calling to me from the public library shelves. Shockingly lurid cover art and written in a jokey style that had me, on occasions, laughing out loud this was a treat of a read. Grady Hendryx is a horror fan and has written a couple of novels in recent years but even he would admit horror writing is not what was in its heyday.

The genre, largely in the form of gothic romance, along the lines of Daphne Du Maurier’s “Rebecca” limped along somewhat in the middle years of the twentieth century until three novels which dealt with the darker side of life topped bestseller lists. These were “Rosemary’s Baby” by Ira Levin (1967)- an outstanding example and one of my 100 Essential Reads; “The Exorcist” by William Peter Blatty (1971) which I remember as being badly written even when I read it as a teenager when I was most likely to devour such publications and “The Other” by Thomas Tryon, which I’ve never read.

With the demand for these types of read soaring aided by successful and often notorious film adaptations the floodgates were opened and horror writing took off in a big way. In a flooded market it was important to attract the casual reader and this is where cover art kicked in perhaps like never before. A significant proportion oversold and misrepresented what was between the covers as the horrors suggested by the cover art were not always so effectively conveyed by the text. Whilst quite a bit of the art was astonishing (for various reasons) quite a lot of the authors were not.

Hendrix takes us through various genres that all had their day: Satanic possession, devilish kids and animals, haunted houses and misfiring scientific experiments amongst them and has lavished each section with the often trashy front covers. He looks at the key artists and writers. His text has the right balance between critical appreciation and an awareness of the ludicrousness in the perils these writers put us through.

I realised that during these golden years I could not have read anywhere near as much horror as I suspected I had. In the US hundreds of titles were being published every month with a significant proportion appearing in Britain. I think I was very aware of some of the book covers as many looked familiar but rarely ending up making the purchase. I have, however, noted down some authors who still seem to be in print and require further investigation.

The horror boom ended almost overnight with the huge success of “The Silence Of The Lambs” by Thomas Harris (1988) a book no less creepy than what had gone before but one which was marketed as a “suspense thriller”. When it became a huge seller many horror writers wanted to be marketed in this way and the earlier style of presentation went out of fashion.

This book revisits a recent phenomenon in the publishing world which has been quickly forgotten (although it did shift somewhat into the children’s market with some pretty ghoulish content and cover art in the successful “Goosebumps” series). Those novels that have managed to stay in print have had their cover art toned down since those glory days at least a notch. It’s thanks to Grady Hendryx that we can revisit this tawdry underworld of popular fiction.

Paperbacks From Hell was published in 2017 by Quirk Books.