I rarely watch Sky 1. There was a point sometime this year when I realised I was never going to get round to watching the almost 30 episodes of the series-recorded now past-its-prime reboot of “Hawaii 5-0” that I had stacked up in my Sky Planner and deleted them. The only things that have tempted me over to Sky 1 in recent years (apart from the one episode of “Jamestown” I watched) has been comedy, specifically the early series of the supermarket set “Trollied” and the one series of under-rated football club comedy “Rovers”.

In the last half decade or so I feel that television and film comedy and me have moved further apart. I’m far more likely to laugh out loud at “Coronation Street”, “Gogglebox” (and strangely I’m finding Season 2 of “Dynasty” on Netflix funny and not just because of the ludicrous plot-lines but because of sharp script and assured performances) than at most productions designed specifically for laughs. I’ve tried quite a few series (and not fancied watching considerably more) which really haven’t done it for me. I struggle with the comedy of embarrassment, the self-deprecating bitter edge of comedies such as the critically acclaimed “Fleabag” leave me cold.

Maybe the tide is turning again. There was real warmth and genuine laughs in Channel 4’s “Derry Girls” and it could very well be that Sky 1 have come up trumps with “Brassic”.

On first glance it looks like a programme for those who miss “Shameless” (like me), a sweary, raucous tale of scoundrels living on the edge and finding crime an alternative option to getting by but this time with Michelle Keegan in it. Written and executively produced by lead actor Joe Gilgun who those with long memories may recall as a child actor in “Coronation Street” when he played 10 year old Jamie Armstrong but adult credits include a stint as a Dingle on “Emmerdale”, “Misfits” and “This Is England”. Whilst working on the movie “Pride” (excellent) Gilgun would regale big name co-star Dominic West with tales of growing up in Lancashire and was told by West that if he ever wrote it and filmed it he would appear in it and West is as good as his word and appears here, relishing every moment of screen time as an indifferent doctor. 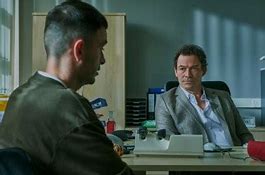 Joe Gilgun and with Dominic West

Gilgun plays Vinnie, who lives in a shack in the woods, is bipolar (like Gilgun himself) and finds himself dragged into situations with his hapless group of friends including Damien Moloney as cardsharp Dylan and Michelle Keegan as Dylan’s girlfriend Erin determined to make life better for her young son; sex dungeon entrepreneur Tommo (Ryan Sampson) and inept junk food obsessive Cardi (Tom Hanson) who is usually in the frame when grand schemes go wrong. And they do. Two episodes in and there’s been attempts to kidnap a Shetland pony and an incident in the sewers with a fatberg that have caused prolonged laughter in our house. Comedy needs more than situations to be memorable and these first two episodes have built up character to an extent that this should go the distance and is a real breath of fresh air in Sky’s schedules.

But talking about schedules….I’m not a fan of this getting a series over as soon as possible. Isn’t anticipation a great aspect of television watching? Surely we can all recall what it feels like to to realise during a day that a show we love is on that evening. That anticipation for me is what makes a 5 star show -something I’m really looking forward to seeing. Sky 1’s approach was to start off with two hour long episodes back to back and dump the rest of the series onto On Demand as soon as the first two were aired. For me, and I know I’m out of step here with my views on how we all now watch TV, this is not treating this with the respect it deserves. Some people will have already watched the whole series whereas I see good TV as something to be savoured. However you watch it I think you probably should make the effort (perhaps not if swearing offends). It is going to be the making of Joe Gilgun, both for his character Vinnie, for his script work in conjunction with Danny Brocklehurst (“Shameless”, “Clocking Off”) and in putting together this new series as an obvious labour of love which has attracted such a vibrant and talented cast and which has high entertainment value and so much potential for the future.

Brassic is shown on Thursday nights at 10.00 on Sky 1. The whole series is available from Sky On-Demand.