Do we need “Strictly Come Dancing” more than ever in the UK this year?  The whole country is bewildered every time they pick up a newspaper or watch the news, it’s a disorientating time,  nobody is trusting anyone in charge and even the weather seems to have abandoned the seasons.  Perhaps we really need the unchanging format of “Strictly” starting in the late summer and occupying our Saturday nights up until Christmas.  With the first episode coming in last night at 140 minutes maybe it is just opiate for the masses, that is if an opiate can be delivered with such sparkle and razzmatazz!

It is a largely unchanging format, with just a few tweaks here and there which amps up the ante so slightly that we don’t really notice it until we see a clip of an episode from some years ago.  It’s revved up to fever-pitch level now, yet unlike the too brash X Factor, it still feels welcoming and homely.  The launch night of Strictly is probably the biggest night for entertainment in UK TV and whereas in the past I might have felt not too bothered if I watched it (although I always have) I found that yesterday I had an air of anticipation about me all day, almost counting down the hours to the first spin of the glitterball.

The major change this year is the introduction of a new judge,  a decision which has caused controversy as Motsi Mabuse is sister of one of the professional dancers, Oti.  Let’s get this out of the way first.  Motsi is good, one episode in and she is an asset to the show.  I never totally warmed to Darcy Bussell’s confirmations of what other judges have said, “the boys are right”, her odd tangled sentences and obsession with a strong core.  Motsi gave some good advice throughout, looked as if she was loving the whole experience and I never actually noticed the bit when she was judging her sister.

We now know that it doesn’t matter that we do not know who the celebrities are, or in the case of vlogger Saffron Barker what they do, other than her saying “I create so much content” in a way that made her sound as if she was saving lives in Africa.  We are going to get to know them very well over the next few months (especially if you watch daily sister programme “It Takes Two”, something I’ve never done consistently but I can feel myself wilting already).  Last year I livened  up the 140 minutes further by scoring the contestants myself and comparing them to the judges scores.  It wasn’t possible for me or the judges to pick the winner early on last year, I noticed from last year’s blog that I had the winner, Stacy Dooley, fairly in the middle of the table, as did the judges.  Looking back at those 2018 scores this was a stronger night, dance-wise, with some really surprising early performances and because it was so unpredictable it made it essential TV.  So, like last year here is my Strictly Scorecard in ascending order.

James Cracknell & Luba – In a night of the unpredictable you really could see this coming.  Olympic Gold medallist James looked almost rigid with fear each time you saw him and his tango looked really stilted with wrong posture and too much standing still.  Has any Week 1 Strictly Dancer looked like they enjoyed it less? (maybe Judy Murray).  Motsi gave him some very good advice, but you can’t help feeling like other tall sportsmen in the past (Mark Foster) springs to mind, he isn’t really going to get it.  The judges also had him at the bottom of the table.  My score – 2  Judges score -11. 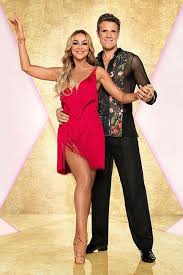 Anneke Rice & Kevin – Anneke claims never to even have had a go at dancing before, which seems a little surprising that she has got to the age of 60 with decades in the entertainment business without having to shake a tail feather but if that’s so she deserves some credit for her cha cha cha to the Laura Brannigan song “Gloria” with the name changed, rather cringily, to “Anneke”.  Kevin did his trick of doing a lot so it didn’t appear that Anneke was doing not so much.  My score – 3 Judges score- 14 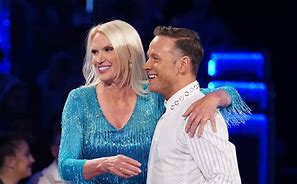 Mike Bushell & Katya – It’s a brave move to do a jive on the first week and I don’t think I am ever going to bond with Mike as a contestant.  He fits nicely into the “Breakfast Time” category of people who last longer on this show than they perhaps should, buoyed by the votes of Breakfast Time viewers up past their bedtimes.  They went for a comedy feel, which was all a little frantic, and I’m not sure that the comedy was necessary as some of the movements were really not too bad and there was a surprising amount of content for a week 1 jive, but I didn’t really like it that much.  My score – 4.  Judges score -22 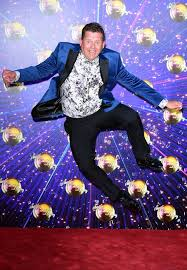 Saffron Barker & AJ – I think the judges saw something different to me here.  It wasn’t bad but they were very enthusiastic about Saffron’s tango.  Maybe I was distracted by her Ariana Grande style high ponytail which flicked around so much that it lost the sharp staccato which is the trademark of the tango.    My score -4. Judges score -27

Chris Ramsey & Karen – Performed a cha cha cha which had arms thrown all around the place and was stilted, but there was some hip movement and he looked like he was really enjoying it.  I think Chris will score highly for likeability and hope he will be around for enough week to build on these early glimmers of potential.  My score – 5 . Judges score -13

David James & Nadiya– Ex- England goalkeeper David did a foxtrot to football anthem “Three Lions” and is going to face the problems all of tall sportsmen.  He did, and I don’t think the judges picked up on this, present his partner very nicely throughout the dance.  My score- 5.  Judges score -17 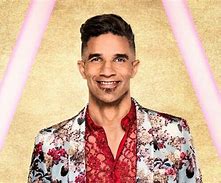 Viscountess Emma Weymouth & Aljaz– Loved the pre-dance clip of them feeding giraffes at Longleat and giving rhinos a mud bath, this celebrity who I had never heard of had won me over quite a bit before she started dancing her cha cha cha.  There was real evidence of being able to dance here but it was all a little uptight, which given that it was week 1 is really what we should expect.  You can tell that she is going to get better and that’s one thing that Strictly viewers like (don’t be too good in the first couple of weeks).  My score – 5.  Judges score- 19

Will Bayley & Janette – Paralympian table tennis player really threw himself into his quickstep from the off.  Head judge Shirley said his musicality was “off the charts”, although according to Shirley there were quite a few things that were “off the charts” in this season opener.  My score- 5 Judges score- 26

Emma Barton & Anton – People are already saying that EastEnders actress Emma is Anton’s best chance to win this competition for the first time, hopefully he will not overdo the “comedy” which has kept him in even when his dancers haven not been up to much.  There’s certainly potential although their jive looked a little sedate compared to some of the other dance routines tonight.  Was this Anton getting the jive over and done with on a week when it doesn’t count as much?  My score -6.  Judges score- 23

Catherine Tyldesley & Johannes – Pro dancer Johannes’ first dance with a celebrity was a very solid Viennese Waltz to “I Got You Babe”.  It was a bit skippy in places and there was the odd moment of disorientation after all that twirling.  My score – 6.  Judges score -20

Alex Scott & Neil – Ex Arsenal/England footballer and now TV pundit Alex had the job of opening the show with a  pacy quickstep to “I Get A Kick Out Of You” (see what they did there?) in a costume which was pretty stunning.  Loads of personality if a little light on content.  Partnered with Neil Jones who has also not mentored a celebrity before and until tonight was best known as one of the victims in last year’s headline-grabbing “love rat scandal” and who inexplicably responded to the media attention by posting pictures of himself naked and draped over rocks.  My score- 6.  Judges score -21 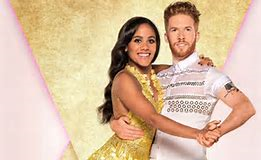 Dev Griffin & Dianne – I was really pleasantly taken aback by Radio 1 DJ’s foxtrot to “Build Me Up Buttercup”.  A real easy style to the dance that they always say is the most technically difficult of the ballroom dances performed with a surprising amount of lightness and grace.  My score -6.  Judges score -30

Karim Zeroual & Amy – Hyperactive CBBC presenter Karim was always going to sell his dance and his cha cha cha was very strong with elements of other street-based styles which made it edgier and very impressive.  My score -7 Judges score -31. 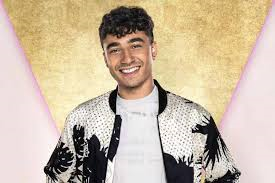 Michelle Visage & Giovanni – I love Michelle Visage.  I love her as a judge of “Rupaul’s Drag Race” I loved her on “Celebrity Big Brother” and I love her campaigning on behalf of gay rights over the years.  A 51 year old American mother of two needs to get round the voters early on as there is history of Americans and older women going out earlier than perhaps they should have done on this show and boy did she do it with a sassy cha cha cha full of attitude and great body movements.  I know that my heart is going to be willing Michelle and Chris Ramsey on week after week and that I’ll feel a little despondent when they both leave the show.  My score – 7 . Judges score -30

Kelvin Fletcher & Oti– This is the big story of launch night.  Kelvin stood in after biscuit heir Jamie Laing injured his foot on the pairing up show.  So with less time to rehearse maybe we weren’t expecting that much from this ex-Emmerdale actor other than he looked good in his tight fitting costume.  But wow!  He and Oti pulled out a samba (a dance which so often goes belly up, especially for male celebrities) out of the bag which was the best dance we have ever seen on Week 1 in Strictly.  This took everyone by surprise and would have instantly silenced anyone saying that Oti stands an unfair advantage with her sister on the judging panel.  This made for terrific TV, and because he stood in at the last minute and because he seemed equally astounded by his performance the public are really going to get behind Kelvin who will not suffer from the “too good too soon” fate of some past celebrities.  On this showing and with this little rehearsal they might as well hand him the glitterball now and we can all find something else to do on Saturday nights before Christmas.  My score – 8 Judges score -32.

My score for the first night show:

(it didn’t even feel as long as usual)

Strictly Come Dancing began on Saturday 21st September at 7.00.  It is currently available on the BBC I-Player.