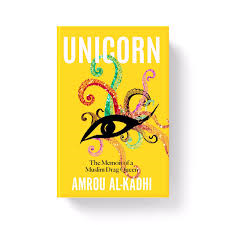 Subtitled “The Memoir Of A Muslim Drag Queen” this book will be unlike anything that you’ve read before. It’s an extraordinarily unflinching account of a search for acceptance from an individual hunting for answers at odds with practically all aspects of life and the crushing need to find a place to fit in.

The title refers to a tattoo Amrou Al-Kadhi had inked because “ they are the ultimate outsiders, destined to gallop alone. They share the body of a horse and are similar in form, but are of a different nature, almost able to belong in an equine herd, but utterly conspicuous and irrefutably other.” This fits in with the author’s self- perceptions exactly as well as the unicorn being “also a symbol of pride, of a creative flaunting its difference without shame.” I’d be hard put to think of a more fitting image in any book this year.

I’ve read a lot of coming out tales and accounts of individuals feeling out of sync with society. Amrou Al-Kadhi has battled with issues of sexuality, gender (preferring to be referred to as “they”), family, religion, drugs, mental health issues and OCD and I’ve probably not covered all of them. If this sounds depressing, wrong, the result is an uplifting extraordinary read.

As a young boy in Dubai and then Bahrain Amrou was totally obsessed with his mother and would do literally anything to keep her attention, which provides the first of the book’s many jaw-dropping moments. His behaviour, perceived as feminine, damaged the relationship with his father and an early declaration of his sexuality cemented that sense of rejection as it was so at odds with the family’s view of Islam. A move to the UK saw Amrou obsessively adopting the new Western culture and a determination to succeed in a manner which could only reinforce his sense of isolation.

This desperate striving for academic achievement led to time at Eton (which was equally miserable) and Cambridge University where the formation of a drag night and then a troupe of performers provided both a reason for being as well as bringing all the underlying tensions up to the surface.

This is Amrou’s first book but there is a background in writing and direction in film work, unsurprisingly, as Amrou is a born story-teller who can vividly recreate events that are often painfully honest in every muscle-clenching detail. It’s a journey towards accepting the self and also beginning to acknowledge situations from other’s points of view. At one point this is likened to quantum physics and parallel events which is a little over my head but allows the author to make some sense from the life story. As a writer, there is definite talent and the emotional intelligence with which difficult issues are conveyed shows great potential for future work. It’s touching, very powerful, outrageous, laugh out loud funny and extremely sad. As a read it both shocked and entertained. Whatever Amrou might have felt at the time the life experiences are almost certainly not unique but they have never been aired in this way before. The search for love, especially within the family and the potential catastrophic pitfalls when this is not forthcoming are expertly expressed. The subtitle, appropriate as it is, might suggest something different but this is a thoughtful, learned, literary work.

Unicorn was published by 4th Estate on 3rd October 2019 . Many thanks to the publishers and Netgalley for the review copy.