I did something new last weekend and attended my first Literary Festival. I did go to the London Book Fair a few years ago but that was a much larger more impersonal commercial event which lacked the cosy meet-the-authors feel of the smaller festivals. This is the 8th year of the Isle Of Wight Literary Festival which takes place in Cowes, centred around Northwood House. This year spread over three days there were a diverse range of speakers including Alexander McCall Smith, Michael Morpurgo, Jo Brand, Jack Straw, Elly Griffiths, Sir Tim Waterstone, Dan Snow and Kate Adie. These were obviously the big crowd-pullers. Their talks took place in a marquee where the audience were herded around corrals and crammed in to listen to their heroes.
I, very sensibly I think, opted to attend two smaller events to hear authors who this year have thrilled me with their writing. The first of these was Kelleigh Greenberg-Jephcott whose fictional account of the later years of Truman Capote is certainly in contention for my Book of The Year and listening to Kelleigh talk about her work in the Ballroom of Northwood House on a very wet October Saturday has certainly made its challenge stronger.

“Swan Song” is a book which seems to have slipped a little under the radar, as when I read it I expected it to be one of the big publishing sensations of the year. It did get longlisted for the The Women’s Prize in Fiction but missed out on the shortlist and probably was never going to join the Booker longlist because it is so readable. Of the 24 or so people who attended her presentation it did seem only a handful had read it. I felt an urge throughout to let her know how much I had loved the book but kept quiet. When it came to question time I couldn’t frame my response to it as a question and what usually tends to happen is that people who haven’t read the book ask questions which is a little irritating for those who have made the effort, but then that is part and parcel of these sort of occasions as the author is there, in least in part, to shift and sign books and probably doesn’t want a roomful of people who already own a copy.

Kelleigh described her fascination with Capote beginning as a twelve year old when she read “Breakfast At Tiffany’s”. She fell in love with his raconteur style and his ability to use words as weapons. With a background in screenwriting she might have been expected to focus in on a more filmic aspect of Capote’s life but it was the story of a literary crime which kept drawing her attention, not the murder of the Clutter family which cemented Capote’s reputation as a leading American writer with his true crime classic “In Cold Blood” but his betrayal in 1975 of a group of women who he loved and who loved him. He did this by publishing thinly-veiled secrets they had told him over the years and mocked them mercilessly in an extract in “Esquire” of his unfinished novel. A crime, because it destroyed him and a number of them indirectly and was almost certainly the cause of a suicide of one woman he dished the dirt on.

As much of her love for the work of Capote triggered this novel Kelleigh found the pull of these society women irresistible and over time came up with the ingenious third person collective voices- the chorus of Capote’s “swans”.

I was fascinated by a bit of back-story of his ambitious mother who almost reached the social standing she believed was her due until her husband’s arrest for fraud led to her suicide. Could this have been an underlying motive for Capote’s literary mauling of these high society women? The six “swans” were pretty much hand-picked by Capote probably because of their potential as characters. If this was a calculated move he certainly played the long game, there was a 20 year delay during which he became very close to all of these women before spilling the beans and devastating their own (and also his own) lives. 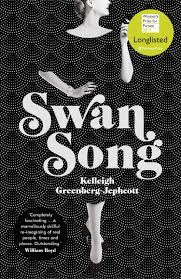 I’m sure I will be talking about this book again at the end of the year which will give you a chance in the meantime to seek it out and become as seduced by Kelleigh Greenberg-Jephcott’s writing as I have been.