Something I very much enjoyed doing last year, was, for my final retrospective of the year to take a look at what other bloggers have been choosing as their favourite books so I thought I’d give it another go keeping a look out for similarities and adding a number of titles to my To Be Read list because of their lavish recommendations.

I was delighted, especially with so many books out there, to see some common ground with Lou at Random Book Reviews as indeed there was last year, especially as she, like me does not restrict her list to books published in 2019 but counts any books she reads as eligible.  In her Top 10 list was my Book Of The Year “Swan Song” by Kelleigh Greenberg-Jephcott and within her top 10 was another that I really wanted to read this year (also featured on Books On The 7.47’s list) “My Sister, The Serial Killer” by Oyinkan Braithwaite.  At number 4 she had a book I’ve actually got out now from the library which I’ve had to renew a couple of times because I haven’t got round to it and that is Joyce Carol Oates’ novelisation of the life of Marilyn Monroe “Blonde”.  Lou mentions that this has been made into a film due to be released soon which will increase the demand for this book so I better get on with reading it soon before other library users begin to reserve it.  Incidentally, Random Book Reviews top pick was a non-fiction choice “Chernobyl: History Of A Tragedy” by Serhil Plokhy which might just be a little too traumatic for me.

Another Lou, who I work with and who has urged me to read so many good books in the past including last year’s Book Of The Year “The Count Of Monte Cristo” and runner-up this year “Sanditon” has decided her top read of 2019 was a non-fiction choice which  combined true crime with a woman’s obsession to find the truth in Michelle McNamara’s “I’ll Be Gone In The Dark”.  She has lent me her copy and I’ve added it to my list so hopefully I’ll be able to let you know what I think of this in due course. 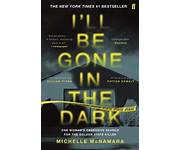 It does seem that 2019 was a great year for non-fiction with Bookish Beck actually highlighting this in her end of year retrospective in which her top choice was “Irreplaceable- The Fight To Save Our Wild Places” by Julian Hoffman with Elizabeth Strout’s “Olive Again” as her top fiction pick.

Going back to Jen at Books On The 7.47’s list which she did not place in any order it was great to see another of my Top 10 choices “Things In Jars” by Jess Kidd together with another one I know I’m going to like Laura Purcell’s spooky Victorian set slab of Gothic “The Corset” which Jen feels is her best yet.

Australian blogger Kim at “Reading Matters” placed another of my Top tenners “Shadowplay” by Joseph O’Connor in her top selection together with one of my choices from last year John Boyne’s “Ladder To The Sky“.  “Shadowplay” also made it into the Top 5 Irish books from Cathy at 746 Books who continues to do a great job in highlighting the excellent works coming out of Ireland.  Also on her list was “The Narrow Land” by Christine Dwyer-Hickey which I’d placed in my 2019 “Looking Forward” post but never got round to reading, further evidence that I should.  Also in her selections was joint runner-up to the Booker Prize “Girl, Woman Other” by Bernardine Evaristo which appeared on my 2019 Should Have Read list and it does seem that if the decision was left to us bloggers there would not have been a tie as I saw this recommended quite a few times and didn’t actually come across any mentions of joint winner “The Testaments” by Margaret Attwood.  In fact, the title that should have given Evaristo a run for her money seems to have been “10 Minutes 38 Seconds In This Strange World” by Elif Shafek which was a top choice from among others Fiction Fan’s Book Reviews.

As 2019 turned to 2020 some bloggers took the opportunity to look at their Books of the Decade.  I certainly would not argue with Margaret at Books Please selection of “Life After Life” by Kate Atkinson and “The Grapes Of Wrath” by John Steinbeck which would probably both be on my Books Of My Lifetime list.  I also very much appreciate the great variety on some lists, it was great to see Colin at Colingarrow recommend the chilling “Blacklands” by Belinda Bauer which gave me a few disturbed nights sleep when I read it and Nina Bawden’s children’s classic “Carrie’s War”.

Other titles I’ve added to my to be read list includes “Fleishman Is In Trouble” by Taffy Brodesseser-Akner (top recommendation of Canadian blogger Anne at I’ve Read This who like me used her end of year report to mention the passing of  her muse to her blog, her cat Smokey.  I know exactly how that loss feels (if you don’t know what I’m talking about see here).  Also added is “Dear Mrs Bird” by A J Pearce (the choice of Julie at A Little Book Problem, “Night Theatre” by Vikram Paralkar the choice of Fiction Fan’s Book Reviews and another Canadian choice Fictionphile’s “Where The Crawdads Sing” by Delia Owens which is due to be published in the UK next week.

So that’s just a taster of what delighted some of us bookbloggers last year.  Now, let’s get on with 2020!!