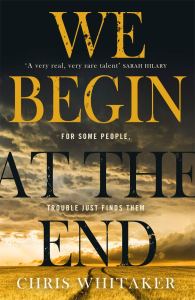 A reviewsrevues.com favourite and former author interviewee is back with his third novel.  Chris Whitaker’s 2016 debut “Tall Oaks” was very strong and critically applauded but I think he got even better with his 5* 2017 offering “All The Wicked Girls“.  With this, his third novel Whitaker proves there’s few better at creating small town America all done with vivid and vibrant characterisation.  Thing is, Chris Whitaker is British.

In Cape Haven the impending release of a prisoner whose crime tore the community apart is causing much anxiety for those directly involved including ailing Police Chief Walker, a troubled mother, Star, and her two children Duchess and Robin.  A solid plot develops as the historic crime overlaps into a present day one but once again what Whitaker does best is characterisation, especially with quirky youngsters.  In “Tall Oaks” we had gangster wannabe Manny, a great comic creation, who really made the debut sparkle, in “Wicked Girls” it was teenage crime-solver Noah and his crew.  Here we have a choice of two with main character Duchess who copes with a miserable life by adopting the guise of an outlaw (I think the author could have made more of this perhaps even referencing it in the book’s title) and maybe even more so the adorably loyal Thomas Noble, a short-sighted black boy with a withered hand whose devotion to the not always appealing Duchess is unquestionable.

I found myself really caring for the characters and enjoying the book most when it focused on these and took a step back from the crime plot.

It feels like a more substantial novel than what has gone before and there is no doubt that Whitaker has matured as a writer.  For sheer reading pleasure I would give “All The Wicked Girls” the edge and I’m still not sure why it wasn’t amongst the big sellers of 2017 but this is still very good and should further enhance his reputation.  He is one of those writers that I am absolutely fascinated to see what he will do next.  Will he continue to recreate the intensity, prejudices and obsessions of small town America or have a go at setting fiction in  his homeland?  Will the crime aspect take more of  a back seat?  I feel that Chris Whitaker could, should he desire, have a good crack at producing The Great American Novel but I would also like to know how his writing would work within a British framework.

We Begin At The End will be published in hardback by Zaffre on 2nd April 2020.  Many thanks to the publisher and Netgalley for the advance review copy.