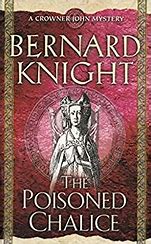 I should really crack on with this series.  I  read  the first one “The Sanctuary Seeker” (1998) back in 2017 and it has taken me this long to get round to the second.  I have another 8 of them on my shelves and at this rate I’m not going to complete them until 2032 and then there are the other five Bernard Knight has written that I do not currently own.

My experience with this one was much the same as the previous which introduced us to medieval coroner Sir John De Wolfe.  I found it took me quite a while to get into it and never felt totally immersed in Knight’s vision of late twelfth century Exeter.  Set a month or so after its predecessor this tale begins with an inspection of a shipwreck then moves back to largely within the city walls as a local silversmith finds himself implicated in two crimes involving daughters of notable families.  Relationships between the characters are further established.  We know that the coroner is going to continue to be pitched professionally against his brother-in-law, the sheriff, an inevitable consequence of the redefining of legal boundaries at the time and is also going to experience a fair amount of conflict with his wife Matilda, preferring the more welcoming arms of his mistress, pub landlady Nesta.

Knight packs quite a lot of history into his text which initially makes it a dense read as the historical significance of events require backtracking and a glossary of medieval terms needs to be frequently consulted but once the plot hits its stride around mid-way through this becomes less of an issue as the events in Exeter are brought to a satisfying conclusion.  I think, on reflection, I did enjoy this more than “The Sanctuary Seeker” which bodes well for the series.

The Poisoned Chalice was first published in 1998.  I read a Pocket Books paperback edition.