And now for something at least a generation earlier than most of the music on my Essential CDs list.  This was the music that our parents and grandparents listened and danced to.  My Dad was a big Glenn Miller fan and always said that during the War that was what the people he was serving with wanted to listen to.  He always said that the notion that Vera Lynn was the sound of the War Years was wrong, that most people he knew found her depressing, that if you didn’t know whether each night was going to be your last then “In The Mood” was a much better bet. 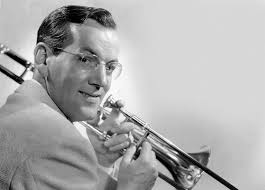 Fast forward fifty years when I knew someone who worked in a crematorium.  I asked him what was the most popular music chosen to leave a service and he said it was Glenn Miller’s “In The Mood”- Now, that was a few years ago and things are likely to have changed as the war years generation have diminished in numbers so much, but there is no doubting the effect that this bandleader’s music has had on many lives.  For those of us born in the decades after his death there is still so much to consider as essential.  The research for chart positions usually takes some time for these CD reviews, but Miller predates all UK charts and the US Billboard charts.  However, “Moonlight Serenade” has charted twice as a re-issue in the single charts (In 1954 probably due to the release of “The Glenn Miller Story”, of which more later, and  again in 1976 when there was a bit of a swing revival).  There have been 11 charting albums for Miller and his Orchestra of re-issued music.  The most recent was actually the most successful – 2010’s “The Very Best Of” issued on Sony which reached number 4 in the charts.  That is a 24 tracker and would seem to be a very good choice.  I however, have gone for this non-charting budget 1998 release  which has 23 tracks in an order which seems to me to provide the perfect Miller playlist.  At times this can be not enough Glenn Miller so then I would opt for the 100 hits collection over 5 CDs which was released by Demon in 2009. 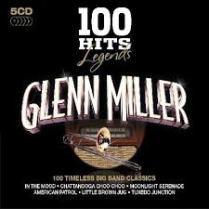 Three of the many other Miller compilations available

Glenn Miller was born in Iowa in 1904 and slogged away very much on the breadline for many years as a trombone player and song arranger.  The 1954 movie “The Glenn Miller Story” which I watched recently, starring James Stewart as the bandleader makes much of the fact that Miller was searching for a sound that he heard in his head.  This came about when he moved a clarinet to the lead with saxophones harmonising which led to a rich, distinctive feel which became established as “The Glenn Miller Sound”.  This clarinet player Wilbur Schwartz spent five years in the Orchestra until 1942 and died aged 72 in 1990. By the time war broke out in Britain in 1939 Miller was a huge star.  He had the Orchestra, a vocal group “The Modernaires” and a number of featured vocalists such as Ray Eberle, Marion Hutton, Tex Beneke, Paula Kelly and Skip Nelson all of whom feature on tracks on this CD. 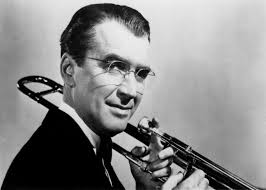 Miller was first and foremost an arranger, adapting tunes to his signature sound.  His main songwriting success came with “Moonlight Serenade” which closes this CD.  The “Glenn Miller Story” features it being composed then being turned into a cheesy vocal number with limited approval before Miller is persuaded to develop it as an instrumental track.  With its clarinet led saxophone section this sums up perfectly the Miller Sound that turned him into a household name.

The most essential tracks, and those that brought the most success were the instrumentals and the CD kicks off with the most radical of them all.  “In The Mood” had been first recorded by the Edgar Hayes Orchestra but Miller’s version from 1940 with its jive rhythms seems to nod towards the rock and roll that would be sweeping the nation by the mid 50’s.  Its changes of volume and intensity throughout the track also makes it memorable.  Great track, but I think I favour even more what comes next, “String Of Pearls” which is chock-a-block with hooks and has that middle section which sounds like it comes from a 60’s movie soundtrack.  This is a more jazz-influenced sound.  Here Miller’s 1941 recording is the original version of the song.  It is significant in The Glenn Miller Story as James Stewart’s Glenn, whilst a struggling musician, scrimps to buy a pearl-like necklace for girlfriend Helen (played by June Allyson) who is presented with the real thing when, now famous, he introduces the song at a nightclub. 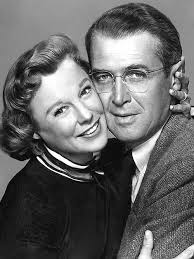 The same film also features “Little Brown Jug” with more than a measure of poetic licence.  In the film Helen loves the song and it is heard sung by a glee club as the courting couple take a walk through campus grounds.  She suggests Miller arranges it but he holds out until it is used as a Christmas surprise for his wife at the Christmas concert.  This is a tearjerker moment in the film because (I’m sure I’m not spoiling anything here, we all know what happened to Miller) he has not turned up for the concert as his plane has been lost in fog.  In reality, the song was one of the Orchestra’s early  hits from 1939, his first million-seller recorded some five years before Miller’s disappearance.

After these three instrumentals we get a number of vocal tracks including the sublime “Serenade In Blue” and the rightly famous “Chattanooga Choo Choo” (rather spoilt for my generation who will recall it as “Toffee Crisp A Choo Choo” from a television ad). A number of the vocal tracks are songs that were already popular numbers such as “Over The Rainbow”, “That Old Black Magic” and “Don’t Sit Under The Apple Tree” but there are some little gems to be found amongst these.  I have a big soft spot for “Humpty Dumpty Heart” and especially, “Elmer’s Tune” from 1941 which was a vocal version of an instrumental by the Dick Jurgens Orchestra.  “On A Little Street In Singapore” is another gem which was covered magnificently in 1978 by Manhattan Transfer(UK#20)- a group who had their UK debut hit with another song associated with Miller when “Tuxedo Junction” got to number 24 in 1976 during that mini Swing music revival I mentioned earlier. 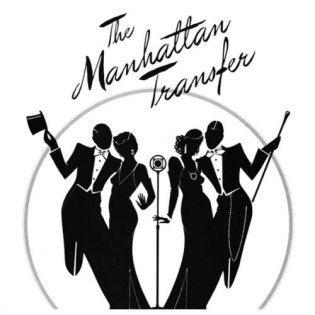 Manhattan Transfer scored big with songs associated with the Orchestra

There’s a couple of ambitious instrumentals in Miller’s take on Verdi with “Anvil Chorus” with its drum solo and “Song Of The Volga Boatman” recorded with the Army Air Force Band with its strident jazz arrangement.  In 1942 the Glenn Miller Orchestra was disbanded as Miller joined the Army Air Force and directed its band.  Miller was an incredibly popular touring attraction, played to troops in war-torn Europe and America and was promoted to the rank of Major.

The CD ends with five first class tracks, the almost-instrumental of “Pennsylvania 6-5000” (the phone number of New York City’s Hotel Pennsylvania where the Orchestra played).  “I’ve Got A Girl In Kalamazoo” is a great fun track with vocals by Marion Hutton, Tex Beneke and The Modernaires.  This leaves us with two monumental instrumentals the stirring “American Patrol”, a nineteenth century marching song  which Miller brought to a whole new audience with his 1941 version and the aforementioned Miller composition “Moonlight Serenade” which provides a  great closer for this immense talent.

Major Glenn Miller was lost at sea in a plane crossing to France in December 1944.  His success did not last the entire war and yet over 70 years later his music is so redolent of that time and the hope and optimism of those who listened and danced to his music.