Some days just feel like Pooh days, and more often than not they are pooh days in every sense as they are the times I feel like escaping from the realities of the world we’re living in and retreat to the Hundred Acres Wood for a bit of sanity, Winnie The Pooh style.

I’m not sure AA Milne knew exactly what he was unleashing when he decided to put together the bedtime stories he’d been telling his son using his toys as characters and that almost 90 years later this publication would still remain one of the greatest children’s books ever.  In fact, the philosophies of Pooh and his friends expounded in this book and its follow-up “The House At Pooh Corner” (1928) (which introduced the irrepressible Tigger) makes it an essential also on every adult bookshelf.

I certainly read and had read to me this book as a child but I was a greater fan then of the Disneyfication of Pooh and it wasn’t really until I hit my late teenage years that Milne’s original creation became dominant.  Whilst at college I had quite a little collection of EH Shepard’s illustrations on mugs, towels, postcards etc and was well versed in the wisdom of this extraordinary little bear and his pals.  In 2003 the BBC Big Reads survey (still the definitive list of what is good for us combined with what we enjoy in our books) placed this at number 7, so it is a book held dearly in a lot of hearts.

On every read I become totally captivated and surprised by how much stays with me.  I also feel this way about Milne’s children’s poetry collection “When We Were Very Young” (1924).  Luckily, it was not just Christopher Robin Milne who benefited from these wonderful stories and characters as generations will have come to love Pooh, Piglet, Eeyore, Rabbit, Owl, Kanga and Roo.  As each character is introduced in the book a warm feeling envelopes the reader and it was a sheer delight once again to experience Pooh getting stuck in Rabbit’s doorway, Eeyore losing his tail and celebrating his birthday miserably and Piglet getting flooded in.  Magical stuff!

I’ll leave you with two examples of the logic of Pooh in case you’ve not read this for a while;

“Wouldn’t they notice you underneath the balloon?” you asked.

“They might or they might not,” said Winnie-the-Pooh. “You can never tell with bees.”  He thought for a moment and said: “I shall try to look like a small black cloud.  That will deceive them.”

“Then you better have the blue balloon,” you said and so it was decided. 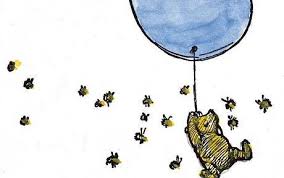 And there’s Piglet surrounded by water and putting into early practice one of the tenets of Cognitive Behaviour Therapy of modelling your actions on someone who would be successful at a problem;

“There’s Pooh, “ he thought to himself.  “Pooh hasn’t much Brain, but he never comes to any harm.  He does silly things and they turn out right.  There’s Owl.  Owl hasn’t exactly got Brain, but he Knows Things.  He would know the Right Thing to Do when surrounded by Water.  There’s Rabbit.  He hasn’t Learnt in Books, but he can always Think of a Clever Plan.  There’s Kanga.  She isn’t Clever, Kanga isn’t, but she would be so anxious about Roo that she would do a Good Thing to Do without thinking about it.  And then there’s Eeyore.  And Eeyore is so miserable anyhow that we wouldn’t mind about this.  But I wonder what Christopher Robin would do?”

Winnie The Pooh was published in 1926.  Egmont produce a classic edition with the unforgettable illustrations by E H Shepard.