Is there anybody out there who would be interested in reading fiction which features George Clooney as a character? 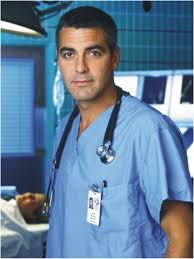 But this is the audacious start of “American Dream Machine” which did have me involved right from the start. The narrator recalls a night getting drunk with a pre-fame George Clooney, a good little vignette which perfectly sets the tone for this Hollywood novel. It’s a tale of two generations dominated by the larger than life, in every sense, film agent Beau Rosenwald. Narrated by his son, there’s a continual blurring of fact and fiction which is very effective. As well as Clooney, real-life characters such as Jack Nicholson and Danny De Vito make appearances and names are dropped frequently.

It is as if Spektor has created a parallel universe where fictional movies are being made alongside the stars’ actual films. This is all done seamlessly. The entertainment industry dominates these lives and there is the continual search for “the next big thing”. This is carried out amongst personal lives which are steeped in secrecy and failure. None of the (fictional) characters emerge unscathed. For me, the first generation of Beau and his associates works better as midway through I was beginning to lose interest in the machinations of these alpha-males. Ultimately, I found it hard to care for the characters. This diminishes the power of this tragi-comedy. Shakespearean references abound and it is clear that Spektor is not afraid of writing on a grand scale. For me, however, like Beau’s Hollywood movies, this novel does not quite live up to its hype.

American Dream Machine was published in 2013 by Little, Brown)