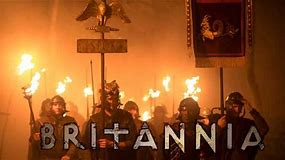 So, how to describe “Britannia” the first episode of which appeared on Sky Atlantic this week?  It’s aimed towards the “Game Of Thrones” fans (which reminds me I still have the last series unwatched on my Sky Planner – for some reason I can’t get round to start watching it) and the box set binge viewers (Sky have taken the now increasingly more common tactic of releasing the whole series on catch-up to lure in the Netflix crowd).  This is no swords and sorcery epic however, being rooted in early British history (or at least with a slight nod towards it). 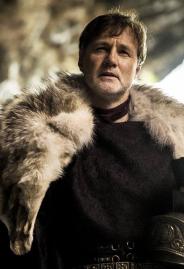 It starts in 43AD with the Romans return to the British Isles after Julius Caesar’s previous attempt to conquer some ninety years before.  This time the Celtic residents are largely caught unawares.  The first Romans we see are four unfortunate individuals hanging by their arms who have decided Britannia was not for them and have made a run for it only to be interrogated by David Morrissey’s General Aulus Plautius.  One gives as his excuse for desertion “Britannia is a cursed land, ruled by the dead”. First pause for “not much has changed laughter”.  Over the intervening years legends have sprung up around giant squids and demons residing in the forests feasting on human flesh.  In reality it’s the challenging weather and the Celtic tribes that will be causing all the problems.  David Morrissey plays a good baddie, even if I did give up on “The Walking Dead” not long after he joined the cast.  The flesh eating zombies and dystopian nightmare of everyday survival was one thing but Morrissey’s “Governor” proved a little too much for this viewer.  Here he’s soon coming up with a plan where one deserter will cut the throats of the others in order to survive. 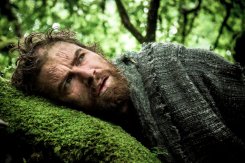 Over on Britannia we’ve already met the drug-raddled The Outcast (Danish actor Nikolaj Lie Kaas) running amok in a frenzy of portents and omens and have seen the preparations for a female initiation Solstice ceremony to womanhood in the Cantii Tribe, which is destined to go horribly wrong.  Right from the off we are seeing society portrayed with women as equals, strong fighting women, which makes this feel different from ancient history tales we’ve seen before and will satisfy Game Of Thrones fan used to strong women in Arya, Cersei, Daenerys and the excellent Brienne Of Tarth will see echoes in characters such as Kerra (Kelly Reilly) and young Cait (Eleanor Worthington Cox) whose entry into womanhood was so abruptly disrupted. 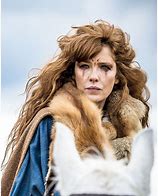 Filmed largely in Prague and Wales, the scenery was often breath-taking which added much to this ninety-minute opener.  High production values are evident throughout. Violent and resplendently unapologetic in its bad language, the flesh-creeping aspects were upped by some particularly unappealing Druids of which Mackenzie Crook is largely unrecognisable as the leader, Veren.  I’m not sure where it’s all going but I’m going to be happy enough to go along with the ride over the next 8 episodes of series 1. 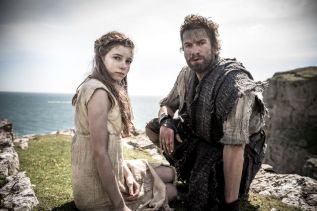 Britannia is created by notable playwright and screen play writer Jez Butterworth who has credits ranging from his first Royal Court Theatre award-winner “Mojo” to the latest in the James Bond Franchise “Spectre”.  He often writes with family members and here script and production honours are shared with brother Tom and James Richardson.  Someone’s been doing the research effectively.  In our household we took to Google after a scene involving a cat as we didn’t think they were in Britain at that time only to discover that Julius Caesar had introduced them to the country on his first trip over.  Viewers don’t always expect historical accuracy when there’ s action-packed over the top drama so it’s nice we’re getting a bit of both here.

The one thing it seems to be missing at this stage is a great piece of music to kick things off.  “Game Of Thrones” is blessed with a great opening score which really gets under your skin.  Here, for some reason we have Donovan’s trippy “Hurdy Gurdy Man” but with the Brits indulging in natural highs and the Smoke Spirit turning the solstice into an acid rave until disrupted by the brutal arrival of the Romans, perhaps it’s not such an inappropriate choice after all.

Britannia’s first episode has given Sky it’s best viewing figures for an original programme for three years.  The last time as many tuned in was for “Fortitude”, (I was one of those but I didn’t last too many episodes on that occasion).  Hopefully, here I will stay the course.  It seems that in this dark germ-ridden January we want to see Ancient Brits go the distance with Roman armies, a bit of magic and strong warrior women.  Bring it on!

Britannia is shown on Sky Atlantic in the UK on Thursdays at 9.00.  In the US it has been purchased to be shown on Amazon.