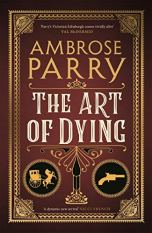 Ambrose Parry’s “The Way Of All Flesh” was one of my crime novel highlights of 2018. I found its Victorian Edinburgh setting refreshing and the combination of an unpredictable crime set-up and a seamlessly incorporated history of medicine at the time was extremely effective. Two strong lead characters also helped, implying a lot of potential for this series.

This was Ambrose Parry’s debut novel but writing under that name is highly established crime writer Chris Brookmyre in collaboration with his anaesthesia expert wife Marisa Haetzman. This follow-up moves things on around a year with Dr Will Raven coming to the end of a tour of Europe and a violent incident in an alleyway before returning him back to the more familiar ground of Edinburgh where he has accepted the job of being his mentor Dr Simpson’s assistant. Here, he meets up again with another of Simpson’s employees, Sarah, but this time her circumstances have changed and it seems the authors are committed to keeping this couple who seem destined for one another apart.

The character of Simpson is based upon a real-life doctor noted for his discoveries with chloroform, which featured largely in the first book. Here, there is still experimentation with its usage, at one point it is served up as an alcoholic beverage but medically, anaesthetics have become more established and the issue now seems to be how to keep a patient alive after work has been done on them internally. Infection is the new priority.

The crime aspect comes via a woman not so keen on keeping the patients she is nursing alive and her narrative is interspersed throughout the text. I felt initially that the crime was taking a back seat compared to the medical history side of things but this is just Parry setting things up very nicely for us. Once again there were unpredictable twists and the novel builds just the way I always hope a crime novel will do.

Once again this is good quality fiction which is very readable, characters are developed (although Dr Simpson himself is more in the background) and I really want to know what is next for Will and Sarah. This series, in the space of two novels has established itself very well indeed.

The Art of Dying is published in hardback by Canongate on 29th August 2019 . Many thanks to the publishers and Netgalley for the advance review copy.