A tale of three fame-hungry young American lads who adopted various pop music tropes (an imaginary family relationship, a move to Sixties London) and who found that fame, had considerable arguments about musical differences leading to a parting of the ways and three solo careers, an extremely talented and very different lead singer who might just have become one of the biggest stars in the world had he gone the way he was pushed, but who rebelled from the out and out commercialism of the pop market to become increasingly avant-garde, eventually challenging the patience of his most loyal fans and yet often viewed as a genius and then the reforming of the original group for a slightly understated last hurrah all over the period of 11 years and eighteen tracks on this 1992 CD. This is the tale of Scott Walker and The Walker Brothers.

This act was never known throughout the career as Scott Walker and The Walker Brothers in that tradition of other sixties acts with hard-to-be-contained lead singers, the double moniker used here is to show that we have a mixture of Walker group and Walker solo tracks amongst the eighteen in a quite random format.

Scott Engels, Gary Leeds and John Maus heralded from Los Angeles. John had used the Walker name professionally and the three began working together recording a single “Love Her” moving Scott from background vocals to the lead. With this recorded the boys decided to try their luck in swinging London and signed with the Phillips record label. The Phillips connection brought them into contact with Ivor Raymonde and Johnny Franz, two of the shining beacons in British sixties pop who were working on the label and had recorded by this time huge classic hits with Dusty Springfield. (Franz would also go on to do great work with Madeline Bell). Adopting a big sound, as they so often did, reminiscent of a more orchestral Phil Spector’s “Wall Of Sound”, especially the hits he had with the Righteous Brothers, and using the equally big voice of Scott to great advantage these similarly-named non-siblings broke big. 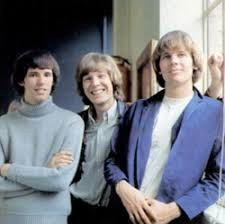 This CD, however, kicks off with the 1976 reunion hit “No Regrets”, used as the title for the compilation. It was great in 1976 to have this trio, who had all go on to have solo careers following their 1968 break-up back in the charts. The song has always seem to me to be understated and despite once again having a big musical feel Scott’s vocals seem distanced on this Tom Rush song. It gave them a number 7 hit but felt more like it could be a taster of more commercial hits to come. With such an initial buzz about the group being back together it was a surprise that this was their last chart hit and the studio album from where it came limped into the UK Top 50 and was also their last taste of any chart action before this compilation came along. 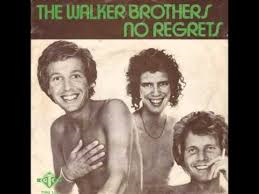 A well- trodden way to get hits in the UK was to raid the catalogues of soul artists whose records had not become hits over here, especially those written for them by big-name composers. Thus Burt Bacharach and Hal David’s “Make It Easy On Yourself” initially with a demo vocal from their lead chanteuse of choice Dionne Warwick but given to Jerry Butler for a US Top 20 hit in 1962 was not known enough to preclude it being an ideal first single choice for the UK production team following the boys’ first hit – the US recorded single “Love Her” going to number 20. This paid off in style and gave The Walker Brothers a UK number 1 single (the first of two) in 1965 and paid dividends in their British Invasion obsessed homeland where it performed better than the Butler original, reaching #16. It’s a great single but as far as I am concerned there was even better to come as the trio enjoyed a run of three classic singles. 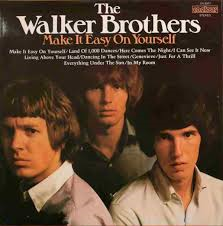 The single releases are reversed on this CD which does save my favourite to last as here first up is “The Sun Ain’t Gonna Shine (Anymore)”, their second chart-topper and their second and final hit in the US reaching number 13 and becoming the song most associated with this trio. The Phil Spector feel was certainly out in force on this Bob Crewe and Bob Gaudio song written as a Frankie Valli solo track with a soulfully dripping vocal from Scott Walker drenched in a kind of baroque misery which just proved irresistible to the British public. Even better, as far as I am concerned is “My Ship (Is Coming In)” which was sandwiched as a single release between the previous two tracks and became a Top 3 UK hit at the end of 1965. I love the unabashed optimism of the lyrics but there’s just a feel, as there is in the greatest soul songs, that all might not turn out as expected. The way Scott opens his vocals for the title refrain is one of the great joys of British Sixties Pop. This song had also been taken from the US Soul back catalogue, this time of another favoured Bacharach and David singer, Jimmy Radcliffe, best known in the UK for his northern soul classic “Long After Tonight Is All Over”. Radcliffe is a greatly under-rated artist and it is hoped that those who loved the Walker Brothers version of this song took time to seek out his recordings.

Following the comeback track and the trio of commercial classics we get on this CD two solo Scott Walker tracks which became hits in 1968/9. “The Lights Of Cincinatti” (UK#13) is fairly standard country-tinged pop typical of the period which doesn’t excite me much. I have always been fascinated, however by “Joanna” (UK#7). This, with its impressive vocal feels like the direction his record company and production team wanted to push Walker into. My Mum loved this song and it is aimed fairly and squarely at the more mature mums and grans end of the market. But they were big record buyers in 1968, a year which had seen chart-toppers from Des O’ Connor, Louis Armstrong and a backwards looking Mary Hopkin and Scott Walker was young and undeniably cool so you could almost sense the excitement of the Phillips label, thinking they had the new Sinatra on their hands with his recording of this Tony Hatch and Jackie Trent song which could not have been more middle of the road. Scott Walker, however, was never one to play ball. 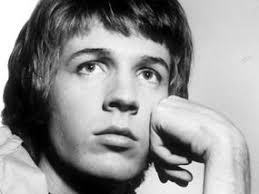 Following another Bacharach and David hit “Another Tear Falls” (UK#12) (originally for soul man Gene McDaniels) on this CD we get three tracks which Scott Walker was happier performing- two of his own compositions and a track originally recorded in French by Walker’s hero singer-songwriter Jacques Brel. Both “Boy Child” and “Montague Terrace In Blue” are sombre, uncommercial tracks which surely  have provided inspiration for artists such as Marc Almond and Morrissey and which took Walker into a completely different direction. His best track of all was his first solo single in which he set out his stall in a way which must have surprised those who thought they knew who Walker the solo artist was going to be from the Walker Brothers output. “Jacky” is an amazing tour-de-force, a track which is just so bonkers which never ceases to delight and amaze. Lyrically, I have never had any idea what is going on. Lines such as “And I’d sell boats of opium/Whisky that came from Twickenham/Authentic queers and phony virgins” were not going to get Scott Walker on Top Of The Pops and the BBC ban was inevitable. In those pre-Frankie Goes To Hollywood Days a BBC ban was counter-productive rather than helpful and this classic single only got to number 22. I just love it, I love the way it threatens to gallop away musically. There was more radio play for the equally Brel-obsessed Marc Almond in 1991 who took the track to number 17 but the Scott Walker version is the gem.

These first ten tracks show how extraordinary the Walker Brothers and Scott Walker could be and the remaining eight could be said to follow along certain patterns without being so ground-breaking, there are more soul act covers “Stay With Me Baby” which actually doesn’t pull off the grandeur of the impassioned Lorraine Ellison original and the Ronettes’ “Walking In The Rain” (both UK Top 30 hits for the Walker Brothers) also works better in its original version. There’s the first American produced hit “Love Her” the track that stopped the run of their classic big hits “(Baby) You Don’t Have To Tell Me” (UK#13- 1966). There’s also the Jacques Brel standard as a solo Scott track, “If You Go Away”, well known in versions by Dusty Springfield, Terry Jacks and Nina Simone together with another 1976 track a version of Boz Scaggs’ “We’re All Alone” (a hit for Rita Coolidge but my favourite version is by The Three Degrees).  Perhaps the most interesting track of this bunch is one which seems to straddle the output of the group and the solo artist, a track written by Scott (under his real name) and Johnny Franz who was very much a mentor to the lead singer in the early years of the career “Deadlier Than The Male” (UK#32) was a film theme tune which seems somewhat ahead of its time and reminds me later acts The Divine Comedy and more explicitly Space who had a #14 UK 1991 hit with a track with similar title and feel (“Female Of The Species”) which was surely inspired by The Walker Brothers song.

Despite a relatively short run of hits the influence of both The Walker Brothers group and especially Scott Walker the solo artist seems to have spanned the decades. Although there is nothing here after 1976 Scott Walker has periodically recorded to critical approval of his avant-garde work if not huge commercial sales. Gary Walker had a couple of UK Top 30 singles (both reached #26) in 1966 when he was still a Walker Brother and has since recorded as country-rock outfit Gary Walker and The Rain. Founder member and original lead vocalist John Walker also recorded sporadically, had his own UK Top 30 hit with “Annabella” in 1967 (#24) became a regular in Sixties revivals shows and died in 2011.
These 18 tracks provide an excellent taster for both The Walker Brothers and the early recordings of Scott Walker.

No Regrets- The Best Of Scott Walker & The Walker Brothers is currently available from Amazon for £4.99and used from £0 .09.  It can be downloaded for £3.99.  In the US other compilations seem more readily available.   In the UK it can also be streamed on Spotify.