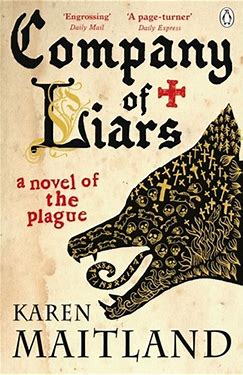 Karen Maitland is an author I’ve been meaning to get round to for some time.  I have a few of her books unread on my shelves, I’ve been tempted into buying them by the darkness suggested by their titles and cover design.  This, her second of her to date nine fictional works is subtitled “a novel of the plague” which with its mid 14th Century setting suggests a read rich in atmosphere and gloom, perfect for these unseasonal Indian Summer days!

I like the premise of a group of individuals with varying backgrounds and dark secrets in their pasts bonding together to escape the plague.  The disease stalking and occasionally overtaking them is superbly done and adds to the atmosphere and tension of the novel.  I realised midway through that I’m never as much of a fan of the “road” novel as I think I am.  For some reason I like characters to get to their destinations rather than just travel there, books which focus purely on a journey such as “Lord Of The Rings” as well as countless others have not appealed to me as much as I would have liked.  (Already I’m thinking of exceptions to that statement, Steinbeck’s “The Grapes Of Wrath” immediately springing to mind).  I think this is a personal quirk which can affect my enjoyment but is not a slight on the quality of the story-telling.

It is narrated by a character referred to by the others as “Camelot”, a peddler in ancient relics of dubious provenance.  Amongst the group fleeing to safety is a couple of musicians, a couple approaching parenthood, a magician and a very strange child with a talent for interpreting runes.  A couple of my favourite characters get bumped off before their time which I found a little disappointing.

Long medieval travels inevitably means story-telling and there are a number along the way which gives the work a Chaucerian feel.  There’s a mystical element appropriate for the beliefs of the time where even the Church acknowledged the presence of werewolves and vampires.

It is a heady mix of history, crime with a touch of fantasy and horror but the elements do not quite come together in the way I was hoping they would.  It’s been a valuable introduction to the work of Karen Maitland and I am sure I will enjoy other of her novels even more than this.  “Company Of Liars” just misses out on a 4* rating because I save that for those books I would be keen to read again and this is one that I’ve read, enjoyed and am ready to move on from.

Company Of Liars was published by Michael Joseph in 2008.  I read the 2009 Penguin paperback edition.