I’m still not totally sure what to make of this Australian six parter which began this week on BBC2. Based on the 1967 novel by Joan Lindsay “Picnic At Hanging Rock” found more fame in the UK via the 1971 film version directed by Peter Weir with its out-of-kilter slightly trippy feel which is considered a significant moment in the development of Australian cinema.

Lindsay’s book has grown in reputation especially in her homeland where it has become pretty much a standard text in the school curriculum. On its publication the author was keen to fudge the lines between fiction and fact implying it was based upon a real-life incident. This has added to the reputation and mystique of the work. I saw the film many years ago on television, probably when I was about the age of the schoolgirls in the tale. I remember it being odder than I was expecting it to be and that I enjoyed it. I’ve never read the book and am not sure whether Lindsay herself incorporated this almost hallucinogenic feel into her writing (published in 1967 so possible as this would fit into the feel of the times, although the author herself was 71 by then so maybe not). The trippy feel is certainly incorporated into the TV adaptation.

The reason I chose to watch this was for its lead, Natalie Dormer, who has excelled in the past in history-based series. I will always remember her as Anne Boleyn in the delightfully demented “The Tudors” but she was also very strong as Lady Worsley in the BBC one-off “The Scandalous Lady W” (2015). She made her mark world-wide in “Game Of Thrones” as Margaery Tyrell who had a memorably short-lived marriage to the noxious young King Joffrey and she’s also been very good in contemporary pieces such as “Elementary” and “Silks”. There’s always great strength in her characters who often do not suffer fools gladly and there’s sometimes an ambiguous darker edge so she is a perfect choice to play the enigmatic British headmistress Hester Appleyard.

The plot hinges on an event on February 14th 1900 when a number of schoolgirls from Appleyard’s school disappear on a picnic at Mount Diogenes. School trip risk assessments did not exist in turn of the century Australia as evidenced by the choice of location for a day out amongst venomous snakes, poisonous ants and a brooding, precarious rock formation. On this opener we begin with Natalie Dormer’s character viewing the property she intends to convert into the school in a scene which clearly indicates she is not who she is attempting to convey. We move in time to the school which has been set up, in Hester’s words, in “the arse end of the world” and onto preparations for the picnic culminating in this episode with the disappearance. It actually all moved faster than I was expecting it to in this first episode. The oddness of the piece was perpetuated by some jerky filming, tilted angles and odd viewpoints which took a few seconds to right themselves. This gave it, at best a slightly feverish feel but there were occasions when it felt like an 80’s pop promo.

What was effective was the soundtrack composed by Cezary Skubiszewski which was anachronistic for turn of the twentieth century but atmospheric particularly in a scene when Miss Appleyard is handed some evidence of her hidden past by one of the girls amidst a pulsing, tense rhythm track. 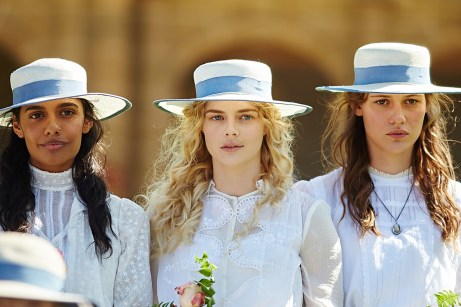 There’s undoubtedly going to be a significant focus on the development of the girl’s sexuality. We saw this is in a scene where one of the girls (and the headmistress) got the better of a lusty young chap; a naïve girl unaware of the changes of puberty and a frenzied exchange of Valentine cards amongst the pupils and staff members which showed the school to be a hotbed of emotions on the morn of the picnic, a scene whose change of pace felt unusual amongst the distanced, cool feel of the piece which largely emanates from Natalie Dormer’s performance. Miss Appleyard tells one of the girls; “The dark gets in you. You can’t just say I’ve had enough now. It gets everywhere”. I think this darkness will continue to infiltrate over the next five episodes. She also said “Infection spreads” which might very well be a theme for the piece.

Produced by the Australian Fremantle company using a mainly female team led by director Larysa Kondracki it feels like a piece with high production values which certainly looks good but I’m not sure whether the source material will have enough to sustain me in this six hour treatment. I’m going to stick with it for the time being though.

The Picnic At Hanging Rock is shown on Wednesday nights at 9.00pm on BBC2. The first episode is available on the BBC I-Player.