My second Peter James novel I’ve read this year is a much slighter affair than “Dead Man’s Grip” which will be in contention for my Book of The Year this year.  “The Perfect Murder” takes my tally of James’ novels to eight which eases him into the anchor position of my Top 10 most read authors alongside Martina Cole and John Steinbeck.  This was because I selected “A Quick Read Novel” from the Sandown Library Russian Roulette Reading Challenge.  This was published for World Book Day in 2010 and can be polished off quite easily in an hour.  The whole Quick Reads enterprise is to tempt people back into reading primarily but it can also provide a cheap, easy read for fans of the author.  Last year I read Minette Walters’ “Chickenfeed” from the same series.  You are not going to get the very best work from an author but hopefully a sampler of what they do in order to tempt you into finding out more.

“The Perfect Murder” is a stand-alone novel set like James’ Roy Grace series in Brighton, although on this occasion it could have been set anywhere.  Victor and Joan Smiley, a rather elderly-seeming pair of forty-somethings are so stuck in the rut of their marriage that the only way out seems to be murder and both are planning to bump the other one off.

Characterisation is broadly drawn yet effective and there are twists to the tale, some of which I didn’t see coming, some I did.  There is a danger when writing these Quick Reads to order that the more limited vocabulary and length these demand can mean that the actual defining style of the author does not come through.  I think this is, to an extent, a valid point in both the James and Walters novellas I’ve read but the Brighton location and very Peter James front cover goes some way to rectifying this.

I know that Peter James has produced at least one collection of short stories and here he displays that he has the knack of conveying a sinister involving tale in a succinct fashion.

The Perfect Murder was published by Pan Books in 2010. 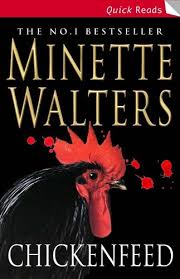 One of the continuing aims of World Book Day/Night is to get reluctant readers immersed into the world of books.  Back in 2006 a set of “Quick Reads” were published in an initiative between publishing and other related industries.  Twelve popular authors were asked to produce short, fast-paced books to bring people back into reading and to encourage the emerging adult reader.  It was a highly successful enterprise which has been repeated in subsequent years.  Amongst this first batch of Quick Read authors were Val McDermid, John Francome, Ruth Rendell, Maeve Binchey and Minette Walters who was presented with the Readers’ Favourite Award for this short novel “Chickenfeed”.

I have read three earlier Walters novels, “The Breaker” (1998) which I really enjoyed, her 1993 breakthrough novel “The Sculptress” which I had more reservations about and “The Tinder Box” a novella from two years prior to “Chickenfeed”.  I’ve seen that book described as a “Chapbook”, I’m not sure what constitutes that in the 21st Century.

In “Chickenfeed” Walters fictionalises a real-life crime. It has a simple plot-line, understandably given its length and scope and much is given away in just a few lines on the back cover.  I like the surprise element of reading and often do not read back covers until I’ve finished the book and too big a reveal is the main reason why.

The murder took place in the 1920s on a chicken farm and it’s a tale of boy meets girl, girl has unrealistic expectations, boy wants to get rid of girl but she won’t take the hint- a universal life-lesson theme but here it ends in tragedy.

The most interesting and thought-provoking aspect can be found in the author’s notes at the back of the back where Walters doubts the established turn of events and gives a very valid reason why.  This challenges what has been assumed before and if I was a reader with limited recent experience of books I might just feel stimulated by this doubt raised and want to read more.  This book could very well be an entrée into crime fiction and true crime accounts.

By its very nature this is a slight book but well handled.  As I didn’t read the back cover I wasn’t sure how it was going to pan out or even who was going to be murdered.  I read it in under an hour, the largish clear print meant I could read it on the bus without my usual slightly nauseous feeling and it was certainly time well spent.  Just sometimes there’s a lot to be said for a “quick read”.

Chickenfeed was published by Pan Books in 2006