This week at my local theatre in Shanklin on the Isle Of Wight I had the great pleasure to see live for the very first time Count Arthur Strong who brought his three man show “The Sound Of Mucus” over to the island.

Despite three series of his half-hour comedy shows on BBC television there were still a number of people who were asking locally “Who is Count Arthur Strong?”  It does seem that this comic creation by Steve Delaney whose inspiration stems from some of the comedy greats of the past is still under-rated.

For the uninitiated the Count began his broadcasting life with in 2005 with “Count Arthur Strong’s Radio Show!” which first brought to attention the  everyday life of this bewildered ex-Variety star.  The TV series is written by Steve Delaney with Graham Lineham and has been nominated for both Comedy Awards and for Best Sitcom at the BAFTAs.  The third series is currently on BBC1 on Friday evenings at 8.30pm.  This is an earlier transmission time which should bring in a younger audience as the Count is perfect Friday night family entertainment.  So far two episodes of Series 3 have been shown. This week’s gave way to Question Time but should be back with us when the General Election has been and gone.

The first episode of Series 3 saw Arthur roped into carrying out an exorcism and it was amusing but not classic Arthur.  I laughed more at the second episode where Michael (Rory Kinnear) ,whose association with Arthur began whilst researching a biography on Michael’s father (and Arthur’s ex-comedy partner) and who has been stuck with him ever since, was called for jury service and Arthur and odd-ball pals from the local cafe went along to support him.  There have been quite a few classic comedy moments in the previous two series.  Anyone wanting to dip into the world of the Count might want to seek out “The Radio Play” and “Arthur’s Big Moment” from the first series.  In “The Radio Play”, Arthur believes his acting career is due for a revival when he gets a small part in a radio play and “Arthur’s Big Moment” sees him, in a hilariously surreal sequence performing his variety act for a captive audience.  From Series 2 I won’t forget in a hurry “The Days The Clock Went Back” which builds misunderstanding upon misunderstanding and sees Arthur mistaken for a flying instructor in a sequence worthy of the best of “Some Mother’s Do Ave Em”.  Also seek out “Still Life” where Arthur attempts a new career as a living statue – all these have had me laughing until it hurts and so was delighted when he was making a stage appearance just down the road. 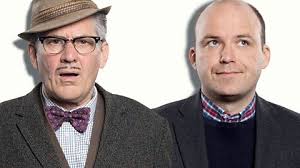 Something I heard somebody say as we left the theatre was “I don’t know why it’s funny, it just is” and that’s actually the joy of Count Arthur Strong.  I think it’s very British humour and seems to be in direct descendant to comedians of the past such as Harry Worth (where there are physical similarities in the hat and coat and from what I remember of Harry through misunderstandings), Hylda Baker (in malapropisms and bungled sentences), a touch of Frank Spencer (in ineptness to function), Tommy Cooper (in his ability to get laughs just standing on stage) and in his pompousness there’s even a touch of  both Captain Mainwaring and  Hyacinth Bouquets  There’s also in its joyful humour and playing with words a childishness which evokes memories of the golden age of children’s television and those people that you either dimly remember or were told about such as Mr Pastry, “Crackerjack” and Peter Glaze, Jimmy Edwards and the humour of “Rentaghost” yet it is more than a nostalgic nod to comedy pasts as it seems rooted in real people.  Like the best of comedy writing and despite its surrealness and occasional flight of fancy it seems authentic  and based upon real  (admittedly eccentric) people. 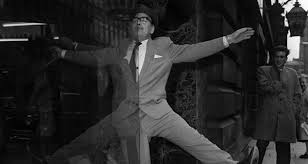 Harry Worth most remembered for his shop window routine

Steve Delaney is 63 years old and has been playing this lovable bumbling character for over thirty years from when he was a drama student, down from Leeds and studying at The Central School of Speech and Drama.  The Count was resurrected in the late 90’s where he became part of Delaney’s club act, got the radio show and became a success at Edinburgh Festivals.   It’s been a long process, rather like the whole Mrs Brown phenomenon, another perfect case where I find myself laughing without really knowing what’s funny. 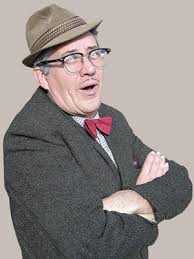 His stage show “The Sound Of Mucus” is Arthur’s attempt to bring to life that Rogers and Hammerstein musical classic only someone has made a mistake at the printers.  Julie Andrews is suddenly not available to take the stage with Arthur so we have to wait for his friend Renee to arrive on the coach and to do her shopping from Lidl.  It co-stars Dave Plimmer (Eggy from the TV series but here playing stage-hand Uncle Alan) & Terry Kilkelly, as the Count’s PA, Malcolm.  As the show progresses Arthur has a few snifters of his special “Scottish Lucozade” which both loosens and restricts, especially when he has to come to grips with his Sulky Monkey ventriloquist puppet when he aims to re-enact “The Hound Of The Baskervilles”.  The script is both clever and funny and yet I laughed just as much at the moments away from the script, at moments of stillness, even a bench being dragged along the stage..  So did the rest of the audience.  The Count is still a bit of a cult figure and there’s always a danger of the audience not really getting it but he had them eating out of the palm of his hand from the moment he walked on stage.  The response was warm throughout especially when Arthur turned his hand at singing (his version of Bill Wither’s “Lovely Day” was a treat) and when we eventually got to the songs from the “Sound Of Mucus”, “16 Going on 17” had me almost breathless with laughter.

Steve Delaney taking time off from the Count

The show has quite a few more dates to run over the summer including Plymouth, Weston-Super-Mare, Crawley, Oxford, Derby, Weymouth, Bristol, Margate, Nottingham and finishing off at the Liverpool Empire.  For Tour Dates see http://www.countarthurstrong.com/events/.     If you are an Arthur novice I would suggest watching a few of his clips on “YouTube” to see if this quirky humour is for you.  I certainly had a highly enjoyable evening in his company.

for both TV and stage show

The third series of “Count Arthur Strong” is being shown on Fridays at 8.30pm on BBC1.  Previous episodes are available on the BBC I-Player.  The DVD of Series 3 is released on 17 July.  The first two series are available on DVD.