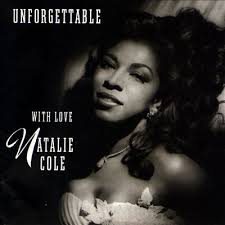 Four years after the commercial and critical success that was my last essential album Natalie Cole’s “Everlasting”  came the album she was born to make. There had been one album in the interim period 1989’s “Good To Be Back” released on EMI-USA. In the UK this became her biggest ever album reaching number 10 and from it came her biggest ever British single, the number 2 placing of “Miss You Like Crazy”. It featured a range of musical styles, once again confirming her versatility as an artist but for me, was a good, solid album rather than an essential one. In her homeland it reached number 59 so wasn’t really building on the success of “Everlasting” over there but the hit track gave her another Top 10 US single (number 7) announcing that not only was she back but she was a reliable seller as an artist.

The idea for her next album was one that had been continually suggested from the start of her career. She had resisted but by the early 90’s with Nat’s music still very much in vogue there was talk of other artists considering this- George Benson, Al Jarreau and Barbra Streisand were all mentioned and to an extent Natalie realised it might be now or never for her. In her autobiography “Angel On My Shoulder” she explains her hesitation.

“One of the reasons I resisted singing my father’s music was because deep down I believed that it would totally change my life –and there were no guarantees that it would be for the better. Now, I felt I had made great progress with myself personally, emotionally and professionally- I had paid my dues, and had my own hit songs. Now I was ready.”

Her label EMI were not keen on the idea, they saw it as a marketing disaster after they had promoted Natalie as a R&B/pop star to then switch tracks and let her explore her roots for an entire album but Elektra were keen on the idea and knew that producer Tommy LiPuma was the man to oversee the project. With him sharing Executive Producer duties with Cole, David Foster and her then husband Andre Fischer were drafted in to produce the tracks. The whole thing was done with style and class and the production of this album is quite sumptuous. Natalie saw it as her gift to her father, something that could never be repeated and had to be exactly right. This is really an ultimate Father’s Day gift and I would imagine quite a few Dads have opened this on Father’s Day.

Did it change Natalie’s life as she feared? Absolutely – Worldwide it is her biggest selling album by far. It gave her an American number 1 album and was the 47th biggest album of the 1990’s. It was a critical as well as a commercial triumph. In 1992 it won the Grammy for “Album Of The Year” together with another five Grammys and Cole herself needn’t have been worried about the desertion of her fans as she once again picked up another Soul Train award which she had deemed so important with “I Live For Your Love” from “Everlasting” – this time it was for Best R&B Album by a Female Artist. The demand for this album was huge, she toured worldwide (I saw her for the second time in her career at the Royal Albert Hall which was a fabulously professional concert). She had spent a lot of her early career being compared to Aretha Franklin, as a result of this album it was Ella Fitzgerald being cited. Like Ella and Aretha, Natalie is one of the greatest song stylists of all time.

It was a labour of love from the start. The songs had to be selected – the producers wanted more tracks on the CD than the label did initially. With the strength of her father’s back catalogue they could have done hundreds. In the album notes Natalie does a good job at explaining her choices. It contains a mixture of her father’s best known tracks together with lesser known, more unusual tracks that many of the listeners would not have heard before. In some cases it feels like Natalie singing one of her father’s songs, in others it is her version which has become definitive, but because of the high standard of the vocal, instrumentation and production every track is of a high quality.

For me, what makes the album so special is the interesting choice of tracks. “It’s Only A Paper Moon” is a well known song by many different artists but Cole sings a rarely used prelude which is just a lovely introduction to the song and which I didn’t even know existed. “Lush Life” is a blues soaked jazz number of heartbreak and alcoholism which needs to be sung by a voice that has battled with demons. Natalie had slumped to the bottom and so this is a fitting song for her to sing and so her version feels more authentic than Nat’s. (Actually, another superb version of this song is by Donna Summer, recorded by her at a time when things had been difficult). Other notable versions have been recorded by Linda Ronstadt, Queen Latifah and Lady Ga Ga on her album with Tony Bennett. Lyrically, it feels like a man’s song but it works so well when it is performed by a woman with its complex chord changes and inherent sense of weariness ;

I used to visit all the very gay places

those come what may places

where one relaxes on the axis of the wheel of life

to get the feel of life from jazz and cocktails

the girls I knew had sad and sullen gray faces

they’d been washed away by too many through the day

The most unusual thing about this song? It was written by a sixteen year old! Billy Strayhorn who went on to collaborate with Duke Ellington had the world-weariness to come up with lyrics such as;

stifling those who strive,

in some small dive

and there I’ll be

while I rot with the rest

of those whose lives are lonely too.

Another surprising songwriter was eden ahbez (lower case intentional), who adopted a fruit and nut eating nomadic lifestyle some twenty years before the Hippy movement began and was reputedly living underneath the Hollywood sign when Nat recorded his “Nature Boy”. This is another complex song which Natalie does a great job on – a song which has already featured on my Essential CD list in superb versions by her father and by George Benson.

As well as possessing the same perfect diction as Nat which makes every word crystal clear to the listener, Natalie is able to up the tempo and put so much energy into the faster numbers. My favourite track on the album is “Orange Coloured Sky” with its “flash, bangs and alacazams”, promenading rhythm and a performance of pure gusto, “Almost Like Being In Love” is taken at a good tempo and at this speed becomes a great swing number, “Avalon” is a short, almost frantic song. I’ve never heard Nat’s version of but it reminds me a little of his “Dance Ballerina Dance”. Of the tracks clearly associated with Nat you get “Mona Lisa”, “L-O-V-E”, “Route 66” and “Too Young” amongst others. The reason the album attracted so much publicity and provided a hit single (UK-19, US- 14) was the final track, a duet with her father on “Unforgettable”. The seamlessness of combining Natalie’s voice with her Dad’s was a technical triumph, but for me I’ve never been totally convinced and I don’t think it adds anything to the solo version. It is something that many people wanted to hear and in the years since this album Natalie has done this a few more times. I think it works best on the more playful “Walking My Baby Back Home” which was re-recorded as a duet on 2008’s “Still Unforgettable”.

This album did push Natalie in a different direction. Her albums since this have sometimes been jazz dominated, sometimes pop/R&B and sometimes there has been a mixture of both. Her most recent album (2014) is of Spanish songs. It really does seem she can sing anything (rather like her father). My favourite of her post- Unforgettable albums is “Snowfall On The Sahara” produced by rock legend Phil Ramone which features a real mix of songs from Leon Russell’s beautiful “A Song For You” to songwriters such as Bob Dylan, Judy Collins, Jerry Ragovy and Michel Legrand. “Unforgettable With Love” is the last of her albums I would deem as essential but there are a lot of treasures to be found in her work since then. Natalie is now 65 and still going strong in a career which has given her 9 Grammys for her vocal performances and it is now forty years since she first exploded onto the music scene with “This Will Be”.