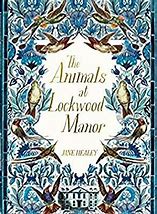 With Sarah Waters absent from fiction since 2014’s “The Paying Guest” here comes the latest author who has incorporated the feel and themes of some of her work into their debut novel. This also reminded me slightly of Sara Collins’ 2019 debut “The Confessions Of Frannie Langton” and that as well as selling well was one of the most critically acclaimed titles of last year scoring the Costa First Novel Award. Jane Healey here has produced a commercial literary novel which has the potential to do well.

Set largely in the early years of World War II museum director Hetty Cartwright is evacuated together with a sizeable collection of stuffed mammals to Lockwood Manor where recently widowed Major Lord Lockwood lives with his daughter Lucy. Hetty has much to prove in the male world of museums and she attempts to do this professionally in this large country house populated by a dwindling staff who view the extra work caused by the displays as a nuisance. Someone begins tampering with the collection but is it human or supernatural? The Major’s wife had been turned mad by the house which had proved to be too alien for her Caribbean upbringing (shades of “Jane Eyre” and “Rebecca”) and her surviving daughter fears for her own sanity in the stifling atmosphere which proves conducive to nightmares.

Narrated alternately by Hetty and Lucy there is generally a good feel for the period but I think the author could have ramped up the tension of life in the house but as the novel progresses I feel that this is lost a little with the focus moving to the relationship of the two leading female characters (incidentally, I felt exactly the same about “Frannie Langton.”)

I found it easy to read, polished it off quite quickly and was involved throughout and enjoyed the turns of the plot but it never managed to crank up to the higher gear which would have made this more memorable. For me the standout book I’ve read in recent years of this type is still Laura Carlin’s “The Wicked Cometh” and as diverting as this is I don’t think it came up to that debut’s standard.

The Animals Of Lockwood Manor is published by Mantle on March 5th 2020.  Many thanks to the publishers and Netgalley for the advance review copy.