A Christmas Gift For You (Phil Spector Records 2002)

Now, I know this is going to be a controversial choice.  I am in no way condoning the actions of Phil Spector that currently finds him a convicted killer in the American prison system.  The man is undeniably a disturbed individual whose drive for perfection has pushed him over the edge to paranoia and madness.  He is the mastermind behind this recording but to ignore what is undoubtedly the best Christmas album of all time and the role of the artists who take part in this recording also doesn’t feel right.

In the UK these songs can be heard on the radio at Xmas time and appear on many compilations.  It’s not like convicted paedophile Gary Glitter who was at one time another voice of Christmas who is never played publicly.  There’s also precedence here in someone who was known as the British Phil Spector, Joe Meek, who shot his landlady  and then himself in a murder-suicide in 1967.  This also horrific act has not prevented play of his biggest hit “Telstar” by the Tornados (once oddly cited as Margaret Thatcher’s favourite pop song!).  The writing was on the wall early on for Spector, a man who is often described as a meglomaniac, who as a young artist and songwriter macabrely used his father’s graveyard epitaph “To Know Him Is To Love Him” as the inspiration for his first number one hit for his group The Teddy Bears and virtually imprisoned wife Ronnie which she recounted in her chilling autobiography “Be My Baby” (1990) and was rumoured to bring guns to the recording studio.  There was a horrific car accident in the mid 70’s and years of recluse before the fateful shooting in 2003 and subsequent incarceration for murder in the second degree.

But, I’ve decided to put the history of Spector behind me in this celebration of a joyful Christmas album, which has been with me for as long as I can remember.  Just as the John Lewis or Coca-Cola ads signify the start of Christmas nowadays in Christmas pasts for me the festive season never really got going until I heard The Ronettes sing “Frosty The Snowman” on the radio (although Christmas started much later when I was young!)

This album was originally released in 1963.  This is the digitally remastered CD which appeared on Phil Spector records in 2002.  It has been released countless times over the years. At one time it was re-released on the Beatles’ Apple Records.  It has appeared regularly in Billboard’s Christmas Music chart listings and its UK chart peak was 19 in 1983 when it was teamed up with a greatest hits album.  I would have played this many times over that festive period.  It has appeared on Rolling Stone magazines list of the greatest album of all time, appears in 1001 Albums You Must Hear Before You Die and is apparently the all-time favourite album of Brian Wilson of the Beach Boys, whose layered vocal harmonies of their hits is a direct nod towards Phil Spector’s “Wall Of Sound”.  It hasn’t sounded quite the same since Spector’s incarceration but a Christmas has never gone by without me listening to it. The All Music Guide To Soul publication rates it five stars and describes it as “This is the Christmas album by which all later holiday releases had to be judged, and it has inspired a host of imitators.”

It is part of my own little Yuletide tradition that every December 24th I have to hear Darlene Love perform her version of “White Christmas” which opens this CD. The reason for this is that little spoken bit when she says – “It’s December 24th”, I like to say “it is” before she carries on with “I’m longing to go up north.”.  Opening with that fabulous echoey sound and taken at a faster pace than Bing’s version.  This is the LA version of “White Christmas” as the sunny weather is making Darlene nostalgic for a bit of snow.  This is my favourite version of the song, I’ve always found Bing’s version to be a bit depressing but this is full of anticipation, snow and, amazingly, sunshine.  It’s not all about the production here as Darlene’s vocal performances on all her tracks are a treat. 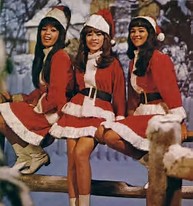 The Ronettes out looking for Frosty The Snowman

Next up is that Christmas song I have always looked out for from a child, the tale of “Frosty The Snowman” by the Ronettes.  Great use of pizzicato strings gives the feeling of ice, the great split second pause after Ronnie Spector sings “Stop!” and those delightfully naïve lyrics makes this a gem of a Christmas tune.  “The Bells Of St. Mary’s”, a less familiar song which dates from 1917 has lyrics which I really don’t know what’s going on but I know that lyrically it has no connection with Christmas.  That apparently came when it was linked with a festive scene in the Bing Crosby film of the same name and with Bings’ close connection with Hollywood Christmases, this song found itself being associated with the season despite lyrics such as the bells calling “the young loves/the true loves/who come from the sea”. It always makes me think of mermaids and the falling red leaves puts it very much in the autumn time zone.  Bob B Soxx and The Blue Jeans are given a massive production here and at times it’s a bit of a battle but the lead singer Bobby Sheen, with Darlene Love and Fanita James on back-up just about avoids being swamped. 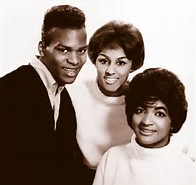 Bob B Soxx and The Blue Jeans

The Crystals’ “Santa Claus Is Coming To Town” begins with a spoken intro about Santa’s workshop and kicks off a storming version which has inspired most other versions since then, especially the arguably more famous version by Bruce Springsteen. There’s a  greathonking sax solo.  The lasting influence of this album is also evidenced in the next track The Ronettes’ “Sleigh Ride” which opens with woodblocks and a neighing horse into a “Ring-a-ring- a- ring -dong-ding” backing vocals.  This song is a certain inspiration for what must know be the biggest Xmas song of all time, Mariah Carey’s pension-fund “All I Want For Christmas Is You”.  23 years on from it’s original release Mariah’s song is currently sitting at number 5 in the UK Top 40 charts where it makes an appearance every year, as it races up charts all around the world.  It has actually never topped the UK Christmas charts and has never made the Top 10 in her homeland but this is now the most recognisable Yultetide song, eclipsing the Slades and Wizzards of my youth.  The Ronettes who provide this track with its inspiration do a glorious version of this song written by Leroy Anderson who was also responsible for the lovely instrumental track “The Typewriter”. It has the real feel of the warmth returning to all your regions after some time out in the snow!

The Ronettes had a fabulous, fierce image

There’s some neo-classical string work to open up another one of the gems of the album the relentless “It’s A Marshmallow World” by Darlene Love.  This song was once again originally a hit for Bing Crosby but I cannot imagine his version has anywhere near the gusto that Darlene puts into it.  An absolute treat of a track.

There’s footsteps and a smacker of a kiss to introduce the return of The Ronettes for “I Saw Mommy Kissing Santa Claus”.  Here’s another song which has inspired other versions including the Jackson Five where Michael is unusually irritating as the tell-tale who’s going to tell Daddy what he’s seen Mommy doing!   The Crystals’ version of “Rudolph The Red Nosed Reindeer” is reminiscent of “Frosty The Snowman” but not quite as good.  Darlene Love is back as the voice of Christmas with “Winter Wonderland” and it is hard not to sing along she frolics and plays “ the eskimo way”. 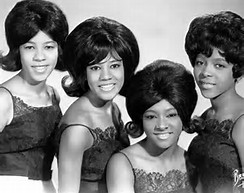 My favourite of the Crystals tracks on display is “Parade Of The Wooden Soldiers”.  This song was originally a march for the piano written at the end of the nineteenth century with its English lyrics dating from the early 1920’s.  I love this tale of a toy shop coming alive and amongst wood blocks and chimes the girls put in a great vocal performance.  There’s a fabulous sense of kitsch to the whole thing.  I love it and it is another of the joys of Christmas.

The one original song written for this album has become a Christmas standard.  Spector alongside Jeff Barry and Ellie Greenwich gave “Christmas Baby (Please Come Home)” to Darlene although it was originally written for Ronnie Spector. It’s a big song which requires big emotions and is probably better suited for Darlene’s voice.  In 2010 this was named Rolling Stone magazine’s best Rock N Roll Christmas song and there is no doubt the sense of yearning Darlene puts across in her vocals has made this of lasting importance. It builds to a thundering climax and is a great example of that Wall of Sound in action.  Other notable versions of the song have been recorded by Michael Buble, Mariah Carey and Leona Lewis and it’s often featured in Christmas movies.

Bob B Soxx and the Blue Jeans are back for a song written and made famous by Hollywood’s Singing Cowboy, Gene Autrey and “Here Comes Santa Claus” which has some great trumpet work amongst the wood blocks, chimes and bells.  The whole thing is rounded up by Phil Spector himself who hovers between the pretentious and creepy with his spoken voice-over of “Silent Night” as he explains his reasoning behind the album.  There’s something always morbidly fascinating about this track and when he finishes his bit it does have a real surge of angelic voices.  As this has been playing as I write this my partner has come in to the room to sit and listen and say “Why do I have to stop to listen to this every year and why do my eyes fill with tears when Spector thanks Darlene Love”?.  I’m not sure either but I know what he means.

Phil Spector believed that he was making an album which would be revolutionary in the music industry and that it was something nobody had done before, doing something special for the music of Christmas.  Fifty-four years on suggests that this was successful.  Away from the holiday season Spector produced so many amazing records, my favourite of which being “He’s A Rebel” for the Crystals but also all-time classics for The Ronettes, The Righteous Brothers, Ike & Tina Turner, The Ramones and The Beatles both as a group and on solo projects.  If only the rest of his personal life had brought as much joy.

There are many versions of Darlene Love singing “Christmas (Baby Please Come Home)” on YouTube as it was an annual event on the David Letterman Show and latterly on “The View” which I think is the US Version of “Loose Women”.  Here Darlene is joined by R&B star Fantasia.