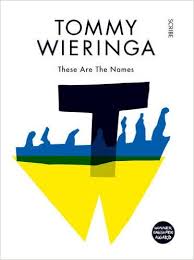 This is the eleventh publication from this Dutch prize winning author (he has now published twelve in his homeland –three are available as English translations).  Set on and around the steppes of Eastern Europe a Police Commissioner Pontus Beg finds himself forming a bond with the only Rabbi left around.  As he embarks on his own personal odyssey a much crueller one is taking place.

In a parallel narrative a group of refugees who have paid to cross the border are dumped on the steppes and left to make their own way to who knows where .  Without the resources to survive the only options are death, madness or dehumanisation to a basic primitive level where superstition becomes linked to survival.  This is a chilling tale with Beg seeking hope in an age-old faith and and the refugees on a fruitless search to their modern Promised Land.  Not all readers respond well to the parallel narrative structure  (I don’t really have a problem with it).  This is something that Wieringa is aware of.  In an interview with Guy Pringle and Lydia Revett for New Books Magazine (NB 84) the author had this to say;

“You might have noticed that every chapter has the same length of more or less 200 words – I did that to give the book a pounding rhythm and to overcome the problem of the parallel narrative : if the reader favours this or that storyline, he doesn’t have to turn the pages impatiently; because of the steady rhythm he knows when to expect his favourite storyline.”

As a result of this the structure works very well.  The depth of the novel is within its themes rather than characterisation.  We are distanced from the diminishing group of refugees just as they are distanced from one another in an environment where support and care for their fellow humans could be deemed as weakness but this certainly does not diminish the horror of their plight.  Wieringa in this translation by Sam Garrett has produced a very readable, thought provoking novel which has already garnered the Dutch Libris and could be expected to appear on a number of “Best Of 2015” lists at the end of this year.